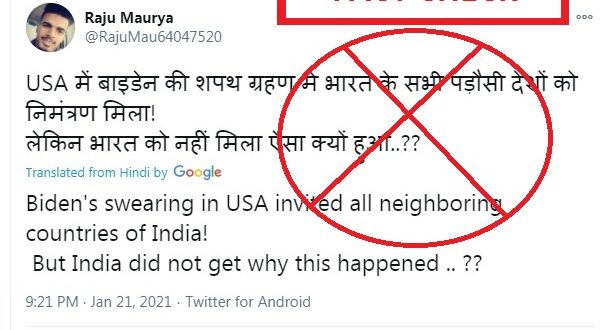 Fact Check: India not invited to US President Biden’s swearing-in?

Coinciding with the swearing-in of US President Joe Biden and Vice President Kamala Harris on January 20, 2021, many messages on social media started making a claim that no Indian was invited to the ceremony held at the US Capitol Hill.

The message which has gone viral on Twitter and shared by many stated in Hindi that “All the neighboring countries of India were invited for Biden’s oath-taking ceremony but India did not get the invitation. Why did this happen?” 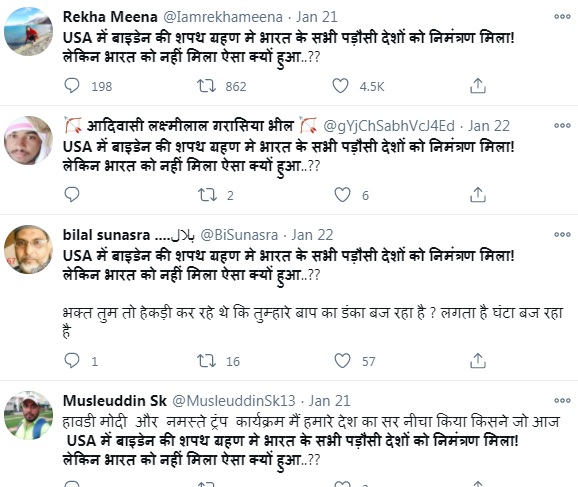 Digiteye India took it up for fact check and found that it was shared or retweeted by many soon after the swearing-in took place, the next day after Jan 20. The event was a low-key due to Covid-19 pandemic in the US. However, it is an event where usually the ambassadors of foreign countries are invited and not the leaders of foreign countries.

Further search revealed that India’s Ambassador to the US, Taranjit Singh Sandhu was invited to Biden’s inauguration day and he was very much present at the ceremony and he tweeted his presence with images as shown below:

The caption of the tweet by the Indian Embassy in Washington DC read, “Ambassador @SandhuTaranjitS at the Capitol to attend 59th Presidential Inauguration – Oath of Office Ceremony of US President-elect Joseph Robinette Biden Jr. & Vice President-elect Kamala Harris.”

Retweeting the Embassy tweet, Sandhu said, “Pleasure to attend the historic ceremony!”. The presence of Sandhu was also reported in many media outlets. Besides India, the ambassadors of China, Pakistan, Afghanistan, and Russia were present.

Since the event was a low-key in view of the coronavirus pandemic, the Biden inauguration committee had urged Americans to watch the ceremony online instead of coming to the venue.

Claim: India was not invited for Biden’s oath-taking ceremony but India’s neighbours were invited.

Conclusion: India’s Ambassador to the US, Taranjit Singh Sandhu was invited to the inauguration of Biden and he did participate in the ceremony.