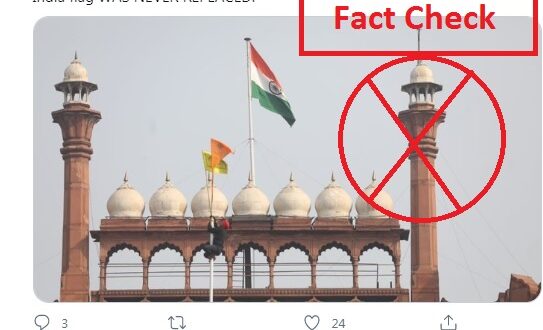 Fact Check: No, tricolour was not removed from Red Fort, nor Khalistani flag hoisted on Republic Day

The protesting farmers have been demanding the Centre to scrap the three contentious farm bills for over two months. They took out a tractor rally on Jan. 26, 2021 and some of them reached the historic monument Red Fort, from where the Prime Minister usually addresses the nation on the Independence day.

While the visuals of the protesting farmers around the Red Fort started beaming, the social media shocked many with the videos of unfurling a flag at one of the domes of the Red Fort, with the claim that the protesters removed the Indian tricolour and unfurled a Khalistani flag. One such tweet is here:

Disquieting assault on our most visible national symbol. That too on #RepublicDay. Our Tricolour replaced at iconic flagpole at #RedFort. Was this protest always about undermining our State? | #RDaySpiritShamed pic.twitter.com/Bfp1psRsAJ

A video shown above is making rounds showing a Sikh protester on top a pole in front of the Red fort unfurling the flag. The tweet read:”Disquieting assault on our most visible national symbol. That too on #RepublicDay. Our Tricolour replaced at iconic flagpole at #RedFort. Was this protest always about undermining our State? | #RDaySpiritShamed” Soon, Twitter was full of reactions sharing the hashtag #RDaySpiritShamed.

The claims are essentially two-fold — that Indian tricolour was brought down and the second one that a Kahalistani flag was hoisted.

Digiteye India took up the viral claim to fact check. A close observation of the background revealed that the Indian tricolour was flying on the main dome of the Red Fort and it was not not removed or brought down as claimed. Here’s the video tweeted by ANI on January 26, 2021 that clearly depicts the incident.

#WATCH A protestor hoists a flag from the ramparts of the Red Fort in Delhi#FarmLaws #RepublicDay pic.twitter.com/Mn6oeGLrxJ

Secondly, the flag that was hoisted on a pole in front of the main dome was not a Khalistani flag but that of Nishan Sahib or Sikh’s religious flag, which is similar to the one used on Sikh shrines. 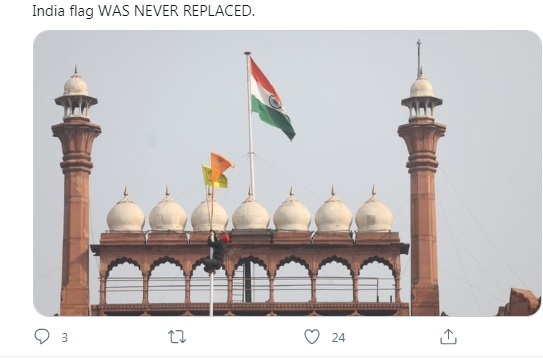 Though Khalistani flag has a similar symbol, it goes with the wording Khalistan as seen below in some of the protests held in Washington DC in front of the Indian Embassy. 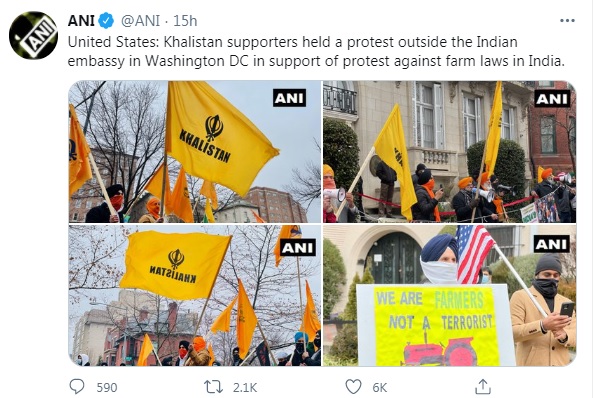 In fact, another flag was also hoisted on one of the domes that belonged to the Kisan Mazdoor Ekta with the wording in green.

Conclusion: False, Indian tricolour was not removed and secondly, the flag hoisted by protesters was that of Nishan Sahib, not of Khalistani flag.