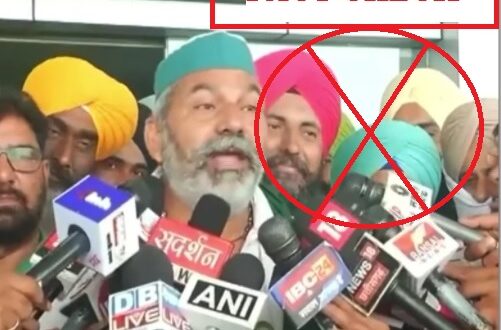 Soon after the bandh, Tikait claimed that the Bharat bandh was a success. However, a video clip of him started going viral in social media in which he was seen threatening the media. Here’s the 12-second media clip:

Rakesh Tikait says their next target is media. Open threat in public to the media. “Either support us or else we will see…” pic.twitter.com/Bnmd2QwXW4

In the 12-second video shows the Bharatiya Kisan Union (BKU) leader saying in Hindi:“The next target is media houses. If you want to survive, then support us, else you will suffer.” Since no media house has covered this part of his address after the bandh, it evoked enough interest among many.

Digiteye India checked for the authenticity of the video as Tikait is known for his peaceful rallies and appeals to the media. The clipping shows ANI in one shot which has given away the clue to the original video. A search for ANI videos showed that it was uploaded on Twitter on September 28, 2021 when  Tikait was addressing media persons in Raipur, Chhattisgarh. Here’s the video:

#WATCH | … Everyone should join us. The next target will be media houses, if you want to be saved then join us, else you’ll also suffer: Bharatiya Kisan Union leader Rakesh Tikait after arriving in Raipur, Chhattisgarh pic.twitter.com/nnCJgS11Z5

In the video, Tikait was referring to the Centre’s policies on farmers. In that context, he said the government’s next target could be media houses. “Those in Delhi sold off half the country by making new laws they’ve sold off 182 mandis in Madhya Pradesh. Chhattisgarh won’t be spared either. It’s time for all of us to come together. The next target would be media houses. If you want to save yourselves, come with us, or else, you’ll face problems too,” and he was obviously not threatening media but urging them to join hands with farmers agitating.

Claim: Tikait threatening media as the next target if they don’t join farmers protesting farm laws.

Conclusion: The video clipping was taken out of context from an old press briefing where he urged media to “join the protests as they would be the next target.”