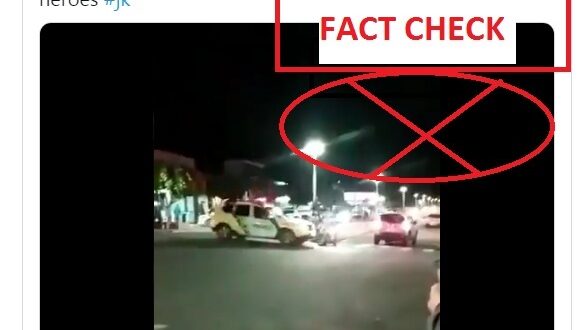 A video of a man’s arrest by police is circulating with the claim that it was Srinagar Police in Jammu and Kashmir who arrested a fleeing terrorist on a motorbike.

The video shows a police jeep knocking the bike from behind and the bike rider trying to flee leaving it but a cop from the police van jumping out and landing a flying kick at him on the pavement, pinning him down quickly. The interesting video is making round with the claims that it in Srinagar and shows the live arrest of a terrorist. It also adds, “Salute to our army heroes.”

Srinagar…… live arrest of a terrorist.. salute to our army heroes #jk pic.twitter.com/vgkwhOPin1

The news that JeM terrorists were arrested was true and carried by news agencies including ANI and Hindustan Times among others. but none of the news outlets have carried any such thriller video as circulated on Twitter with the claim that it was of a fleeing terrorist on motorcycle.

When Digiteye India team searched a frame from the video, the search threw up results showing that the original video belonged to an incident of a minor boy riding a bike in Perola area of Brazilian town  Umuarama. The video was found in a Portuguese website, uploaded on August 2, 2021.

Here is the video of the original bike chase by the Portuguese police called Policia (In Portuguese, Brazil’s official language) as seen on their vehicle:

According to the news item published on August 2, 2021, the rider was a minor aged 17 years who was trying to flee the police when stopped him in Umuarama town. The boy was reportedly asked by police to stop the bike, but he was trying to escape. As seen in the video, the police vehicle hit the bike at a U-turn, and the cop apprehended the rider.

The translation of the description of the video on Youtube reads:”A motorcyclist tried to escape an approach by the Military Police (PM) in Pérola, region of Umuarama (PR), but was surprised by a blow worthy of a martial arts film, given by a police officer. The 17-year-old boy was apprehended.”

So, the claim that it was a video of police apprehending a fleeing terrorist on motorbike in Srinagar amid the news of arrest of 4 JeM terrorists in Jammu and Kashmir is not true. the original video is from Brazil.

Claim: Video shows Srinagar Police chasing and arresting a terrorist.
Conclusion: The video is from Brazil. Police had spotted a suspicious looking rider and asked him to stop. But the man sped away leading to a chase and his apprehension.