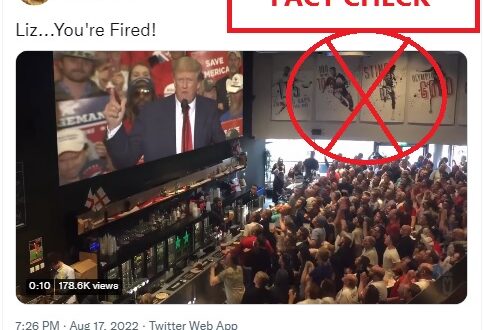 A Twitter post with a video clip has gone viral showing a crowd at a pub viewing former U.S. president Donald Trump telling Republican Representative Liz Cheney “Liz you are fired, get out of here”.

The video has gone viral in view of Liz Cheney, a ctitic of Trump, in news after she lost on Aug 16, 2022 to a Trump-backed primary challenger, Harriet Hageman. The user identified as @C3PMeme, as a satire but still it has generated several reactions here and here.

As the name suggested, it was a parody account though it generated several reactions making people believe that it was true. When we checked for the original video, we could trace it in Youtube to a footage in 2016 that showed football fans celebrating England’s victory against Wales in a Euro match. See the original video on YouTube here. The description reads that it was after the winning goal, scored by Daniel Sturridge.

The doctored video by @C3Meme showed two overlapping videos on the big screen – a message by Cheney on Aug. 17 after her defeat at the polls in the Republican primary in 2022. This video can be seen here and it has nothing to do with Trump. The sequel to it is another old video showing Trump, who was filmed on May 28, 2022, at a rally in Wyoming in support of Hageman predicting her defeat.

Hence, the 2016 pub video was altered to show that it was current and widely circulated on social media despite being a satire account.

Conclusion: Altered 2016 video by a meme account meant for satire has gone viral as real.