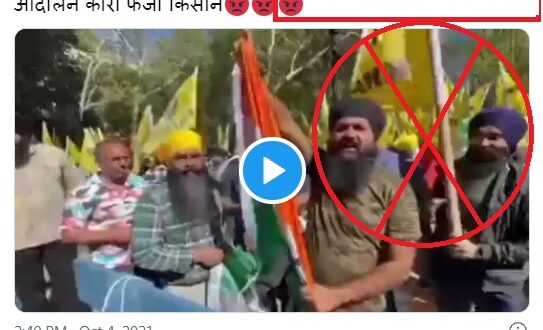 A video showing some people raising the pro-Khalistan slogan is going viral on Twitter. They are seen raising slogans such as ‘Khalistan Zindabad’ and also insulting the Indian flag. See the video:

The message claims that the farmers agitating in Chhattisgarh tore the Indian flag and raised anti-national slogans. It was also shared on other social media platforms with claims that it was Indian farmers who are shouting the slogan of “Khalistan Zindabad.”

Very often, the video clippings of Khalistanis insulting the tricolour have been shown as farmers in India. When Digiteye India team did a Google reverse image search, using key frames from the viral clip, we found results showing a similar video clips uploaded on Twitter handle named ‘NRI Herald’ on October 3, 2021. The message in the tweet read:”Khalistani Sikh extremists spotted at New York during PM Modi’s visit tearing off Indian National flag while shouting extremist slogans.”

Further search on Google News showed that the video originally belonged to protests by Khalistan supporters on September 25 2021. The report said Prime Minister Narendra Modi’s speech at the UN also witnessed a rally in favour of Indian farmers outside the UN headquarters. In fact, Khalistanis protest in front of the UN every time an Indian Prime Minister visits the global body.

Claim: Farmers in Chhattisgarhr insulting the tricolour during their protest