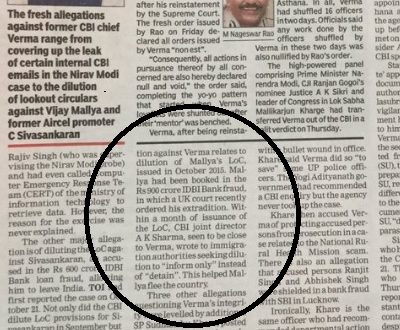 The Times of India in its coverage of CBI director Alok Verma’s sacking by the government on Jan. 10, 2019, covered the cases handled by Verma in detail, but in the process committed several mistakes, thus, misleading readers that the sacked CBI director was behind the LoC issue mistake by CBI that helped businessman Vijay Mallya flee the country.

But, the facts do not match.

Mr Verma, a 1979 batch IPS officer, had joined as DG of Tihar Jail on August 6, 2014 and continued till February 29, 2017, when he became Delhi Police Commissioner. It was Alok Sinha, who was the director of CBI in October 2015 when businessman Vijay Mallya fled the country. How come Mallya’s case of fleeing the country was linked to Tihar Jail Commissioner Alok Verma?

Conclusion: The allegation was made because CBI Joint Director AK Sharma was close to Alok Verma and hence he could be behind facilitating Mallya’s exit, according to the claims. But it was proved false based on the evidence given above. Our rating for this news is ???? (Mostly False).