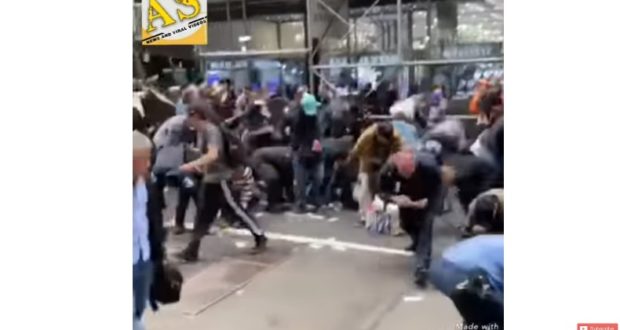 The victory of BJP under Narendra Modi has led to many videos praising the return of Modi but here is one video that went viral. Uploaded on Youtube by “AS news and viral videos” on May 24, 2019, it received 3,663 views so far.

The description to the video says, “Hi, I am Kapil Thakur welcome to our YouTube channel As News and Viral videos. This video we are showing u #modiwin celebration of #onelakhdollar thrown on street of #diamondmarket#newyorkIt showed that Modi’s return has resonated in New York and an Indian millionaire in Diamond Market has celebrated the victory by throwing dollar notes in the air from the building.”
On Twitter too, the video has gone viral with similar claim.

The video has gone viral on Facebook, Twitter and WhatsApp. It was shared by many expatriates in the United States and one of them was Rajiv Malhotra, who has long been backing the BJP and Hindutva. He shared the tweet with a message stating:”The New York-based guy has sold a million dollars to share Modi’s success.”

Apart from reaching some 200,000 followers of Rajiv Malhotra, the video was further retweeted by many.

Digiteye India took it up for fact-check and in Google Reverse Image, found that the video was true but the claim was not. The purported millionaire was not an Indian as claimed but an Afro-American millionarie by name God Joe Kush.

Google Search has directed us to numerous news reports which revealed that the video was actually uploaded on May 17 and not on May 23, when the results of Indian elections 2019 was announced. Secondly, Joe Kush is an American music composer who threw real $5 notes from a building on the 47th Street in Diamond District of New York. Here’s the original video:

Conclusion: The Joe Kush incident has nothing to do with the Indian elections, let alone celebrating Modi’s return to power as claimed by the video caption. Our rating of the claim is ??? Misrepresentation.