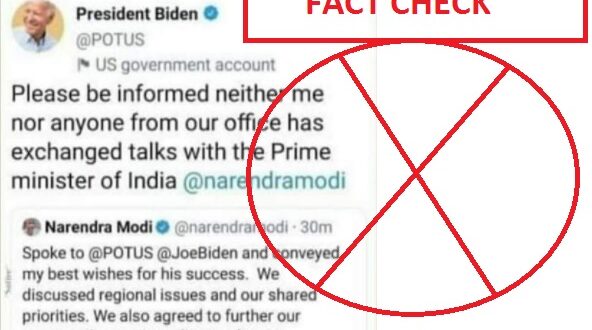 An image of Twitter post by the official handles of Indian Prime Minister Narendra Modi and US President Joe Biden is making rounds on WhatsApp soon after the official conversation between the two world leaders on February 8, 2021.

The post by PM Modi said,”Spoke to @POTUS @JoeBiden and conveyed my best wishes for his success. We discussed regional issues and our shared priorities. We also agreed to further our co-operation against climate change.”

Spoke to @POTUS @JoeBiden and conveyed my best wishes for his success. We discussed regional issues and our shared priorities. We also agreed to further our co-operation against climate change.

However, above the post, another post by Biden’s twitter handle was seen denying the fact that the talks were held between the two leaders. The post claimed that there was no such talks held. See the image below and it said:”Please be informed neigher me nor anyone from our office has exchanged talks with the Prime minister of India @narendramodi”

Realising the sensitive nature of such counter claim by the US, Digiteye team took it up for fact checking and the Google search revealed that the news about the high level diplomatic talks was real. All the news outlets have carried the news that both US President Biden and Indian PM Modi had talks on February 8, 2021. Upon further search on White House official press briefings, it was confirmed on February 8 officially as shown below:

Hence, the Twitter post mimicking that of President Biden was photoshopped and the claim was totally false. A closer look reveals that the post did not maintain the usual correct usage of capitalizing the letter minister while referring to Prime Minister Narendra Modi. It state “Prime minister”, thus revealing the poor grammatical usage not seen in official messages of the US President.

Claim: US President denied having talks with PM Narendra Modi on February 8, 2021.

Conclusion: The message using the twitter handle of US President Biden was photoshopped and the claim that Biden denied having talks with Modi was totally false.

Our rating is totally false –