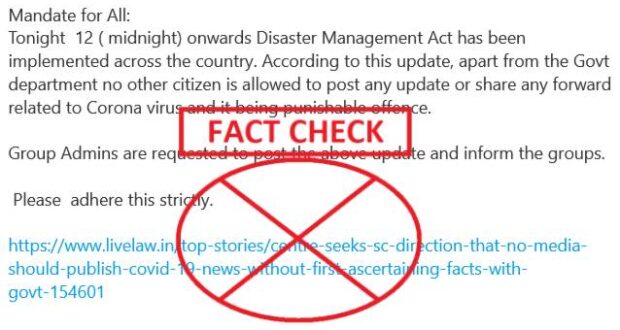 Fact Check: Is there a rule prohibiting citizens from posting any update related to coronavirus?

A WhatsApp forward claims that the Disaster Management Act has been implemented across the country as a result of which no citizen is allowed to post any update or share any coronavirus related message. The message reads as such:

Tonight 12 (midnight) onwards Disaster Management Act has been implemented across the country. According to this update, apart from the Govt department no other citizen is allowed to post any update or share any forward related to Corona virus and it being punishable offence.

Group Admins are requested to post the above update and inform the groups.

The viral forward has also linked an article from LiveLaw. 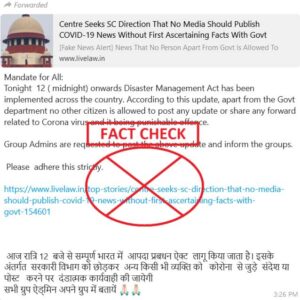 Digiteye India also received the message for fact-checking on its WhatsApp fact check number. On opening the link to the article attached in the forward, the article reads ‘Centre Seeks SC Direction That No Media Should Publish COVID-19 News Without First Ascertaining Facts With Govt’. The article says that “the central government has sought a direction from the Supreme Court that no media outlet should print, publish or telecast anything on COVID-19 without first ascertaining facts from the mechanism provided by the government.”

The article mentions that the government has sought direction from the Supreme Court. It has not become a mandated rule yet. Even if it did become a directive, it would only be applicable to “media outlets”. “Considering the very nature of the infectious disease which the world is struggling to deal with, any panic reaction by any section of the society based upon such reporting would not only be harmful for such situation but would harm the entire nation,” read the affidavit. The affidavit was filed after Home Secretary Ajay Kumar Bhalla sought the intervention of the Supreme Court asking them to issue directions against the media. The Supreme Court held the right to free discussion but it directed media outlets to publish the official data.

LiveLaw published another article talking about this misinformation. It called the news alert fake. The Supreme Court advised “Media (print, electronic & social) to maintain a strong sense of responsibility and ensure unverified news capable of causing panic is not disseminated.”

The Press Information Bureau took to Twitter and tweeted about the same. It called the news fake. 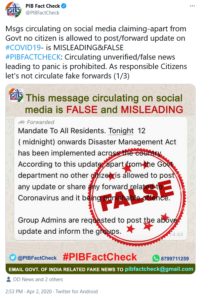 On March 31, the apex court passed an order which stated that Section 54 of the Disaster Management Act may be used to punish those who spread false information. The section provides punishment for circulating false warnings and alarms causing panic to the public.

Claim: According to the Disaster Management Act, no citizen is allowed to post any update or share any coronavirus related message.

Conclusion: The directive is only for media outlets. However, Section 54 of the Disaster Management Act may be used to punish those who spread false information