Ever since 2017, the famous image of world leaders conversing together has been making rounds on fake news domain and this year too, similar image surfaced with an image of Pakistan Prime Minister Imran Khan on Facebook. 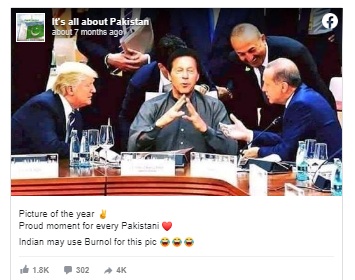 It showed Imran Khan surrounded by global political leaders. Even, US President Donald Trump is seen sitting on the right side of Imran Khan, while President of Turkey Raccip Tayyip Erdogan is behind.

“Picture of the year ✌ Proud moment for every Pakistani ❤ Indian may use Burnol for this pic”, said the caption with the image which has been posted on Facebook. US President Donald Trump is seen sitting to the right of Imran Khan, while President of Turkey Raccip Tayyip Erdogan flanks him to the left.

Since this is an old image debunked earlier, Digiteye India took it up and here are the results. The old image has been used everytime to show a leader in the midst of world leaders. The photoshopped image earlier showed Prime Minister Narendra Modi sitting in the centre, surrounded by other leaders.

In fact, the original picture shot at the G20 summit in Hamburg, Germany in 2017 did not have anyone sitting on the chair in the middle, a fact that has become handy for photoshopping. See the original image here:

Conclusion: Often repeated after super imposing the picture of several world leader, this image has been debunked many times in the past and so is it now with reference to Pakistan Prime Minister Imran Khan.Our rating is ??? Misrepresentation.