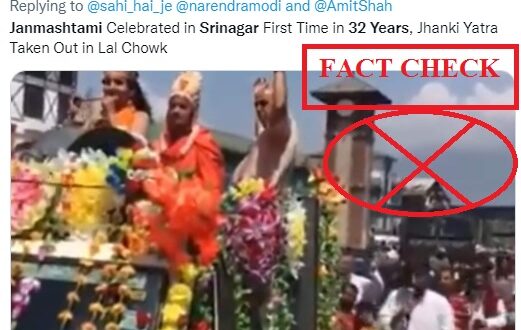 On August 30, 2021 when the country was celebrating Janmashtami, social media was abuzz with a visual of celebrations at Srinagar’s Lal Chowk in Kashmir. However, several  Hindu organisations and activists tweeted the visual with a claim that after 32 years, the Janmashtami is being celebrated in Srinagar and thanked PM Narendra Modi and Home Minister Amit Shah.

The same claim was shared by many people and even reported widely by Sudarshan News, OpIndia, Zee News, News18, Nai Dunia, VTV Gujarati and RSS newspaper Organiser. Many celebrities have shared it  widely on Twitter.

The claim that the 2021 Janmashtami celebration in Srinagar took place for the first time in 32 years means the last time it was celebrated in 1989 but numerous news reports have reported the festival being celebrated several times in the last 32 years.

A simple search on google with a time period from 1989 to the present day shows several news reports showing the details of Janmashtami being celebrated in Srinagar and people participating in the march.

Way back in 2007, Hindustan Times had reported, “For the first time since militancy broke out in Kashmir in 1989, a Janmashtami procession organised by Pandits passed through the famous Lal Chowk.”

In 2014 too, Deccan Chronicle reported that the Pandits celebrated the Hindu festival. It said, “Chanting hymns and waving red saffron flags, Kashmiri Pandits marched through Srinagar to celebrate Janmashtami… The Pandits thanked their Muslim brethren for their cooperation in conducting a smooth ‘jhanki yatra’.

In 2015, India TV quoting a PTI report clearly said:”Attired in their colourful best with some kids dressed up as Lord Krishna, dozens of Kashmiri Pandits took out a procession in Srinagar to celebrate ‘Janamashtami’… The Kashmiri Pandits living in the Valley thronged various temples and participated in prayers before joining the march.”

In 2018, Greater Kashmir has put out a news video as seen here:

Finally, setting aside such claims, Sandeep Koul, a member of the ISKON group, told ALT News that the group has been organising Janmashtami celebrations since 2007 and this year too but denied the claim that it was being celebrated after a gap of 32 years. “Our group organised the 2021 celebrations at Lal Chowk. The social media claim that Janmashtami is being celebrated in Kashmir after 32 years is totally false,” he clarified.

Claim: Janmashtami celebrations are being held in Srinagar after 32 years of gap.

Conclusion: False claim as Janmashtami celebrations are being held continuously in Srinagar barring a few years when the militancy was at its peak.