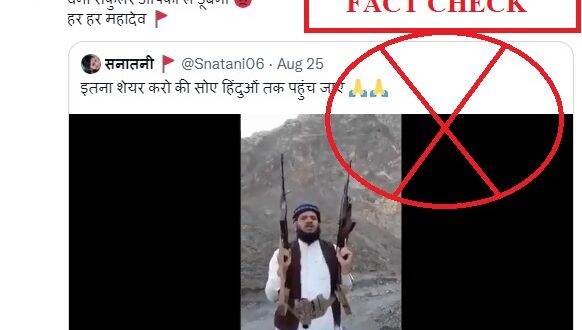 A video is going viral on Twitter and other social media platforms showing a man with two guns in both his hand and threatening India and Prime Minister Narendra Modi with violence. The speaker claims himself to be a Pakistani Taliban leader threatening India. The context is understandably the Taliban takeover of Afghanistan since August 16.

It was shared widely by users on Twitter and many of them have sounded alarm over the perceived threat to India and the Hindus from the Pakistani Taliban. Citing the video, some have chosen to warn that there is a danger from across the border in view of the recent Taliban takeover of Afghanistan. The same video with several remarks was shared by thousands on Twitter, including Bharatiya Janata Party leader Ravinder Gupta.

In the video, the person giving the threat to India, first says that his organisation in Pakistan will takeover Delhi very soon. Next he issues a threat to PM Modi and alerts him about an end to his rule. “We will fly the Pakistan flag over Delhi in less than 24 hours,” he claims in the video.

Owing to recent takeover of Afghanistan by the Taliban, the video obviously took maximum leverage to turn the attention of many in India.

Digiteye India received the video on its WhatsApp and took it for fact checking. When we checked using the key frame for the original video details, the results showed that the video was, in fact, an old one that was uploaded two years ago on Youtube by a user ‘Greater Pakistan’ on August 6, 2019, with the title – “Tribal pakhtun leader Sayed kabir afridi last warning to india”.

The person was identified as Sayed Kabir Afridi — a local leader of Pakistan’s Jamiat Ulema-e-Islam, a Sunni Deobandi political party. Here’s the video:

Clearly, the video was an old one that has surfaced to raise alarm in India about the threat from Pakistan’s own Taliban forces to Modi amid the developments in Afghanistan.

Conclusion: Old video being shared with a claim as a recent video in view of Taliban takeover of Afghanistan.