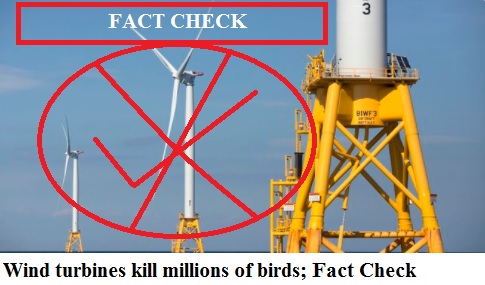 Following US President Joe Biden’s administration announcing on Oct. 15, 2021 that a plan to develop large-scale wind farms along nearly the entire coastline of the country by 2025, the old debate that wind turbines lead to death of birds has come under focus again.

Soon after the announcement of Interior Secretary Deb Haaland at a wind power industry conference in Boston, several messages surfaced on Twitter with claims that the birds would be the worst affected if wind turbines are erected along the coastline in United States. Here are some:

Honestly the main reason I hate wind energy so much I’d because I love nature.

Digiteye India has taken up the issue for fact checking in view of its impact on environment as several species of birds are at the verge of disappearance. According to the United States Fish and Wildlife Service, cats are a bigger scourge to the overall bird community than wind turbines.

Its estimate shows the number of bird deaths at the paws of cats at 2.4 billion. Collisions from wind turbines on land killed a small fraction of birds in comparison to the damage that cats and glass buildings cause to the general bird population.

Our research shows that there is certainly a danger to birds due to tall wind turbines but the percentage of them causing the death of birds is far lower compared to the threat they face from cats and tall glass buildings in cities. Turbines kill birds at a rate that is 0.1% compared to the 624 million estimated birds killed by glass windows, and 0.03% compared to cats. See the report here.

The following Infograph shows the details. 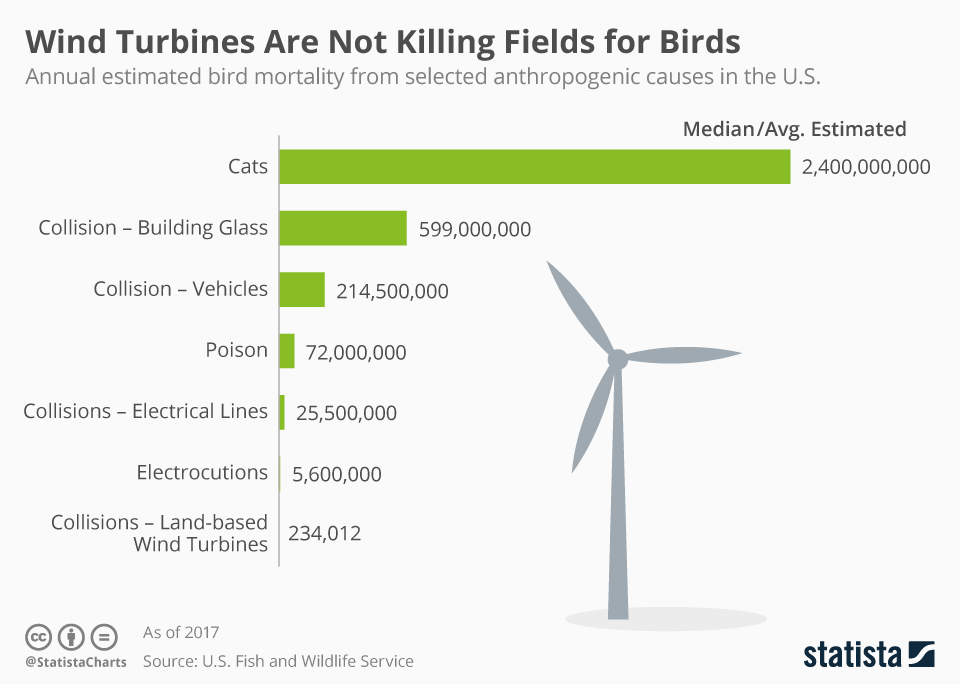 However, it’s true that tens of thousands of birds get killed by these giant turbines. Until recently, several efforts were made to find a way out. Already several scientific solutions gained currency in view of their simplicity and affordability. See the video here:

Wind Energy is a most promising source of Energy. But it sometimes destroy landscapes and it causes bird deaths.

As wind turbines become more common in many countries including India, precautions to avoid bird deaths certainly go a long way as the renewable energy is the most viable solution to climate change.

Recently, some sensor technology has been developed to slow or stop turbines when birds are found approaching. The AI-powered camera detection system called IdentiFlight is helping the wind energy industry become safer for protected birds since 2019.

IdentiFlight scans the sky in a 360-degree radius and can spot any object flying within one kilometer. Once it detects a flying object, the system uses artificial intelligence to analyze the image against 200 image attributes, before switching off wind turbines and protect the approaching birds. See the original study here.

Claim: Millions of birds die due to wind turbines.

Conclusion: Partly true but the percentage is far less than other factors which kill birds. New technologies to safeguard birds from turbines are successfully tested or being tested as the wind energy is the green future among renewable energy sources, especially when fossil fuels contribute to global warming and climate change.