A viral message this morning claimed that former US Vice President and 2020 Presidential front-runner Joe Biden’s second son Hunter Biden, 49, dies of overdose of drugs. It was being shared widely on Chinese video platform GTV, a subsidiary of GTV Media Group, which was founded by Chinese billionaire Guo Wengui, and Steve Bannon, a former advisor to President Donald Trump, in April. It has started appearing on Twitter too, though rarely on October 26, 2020. 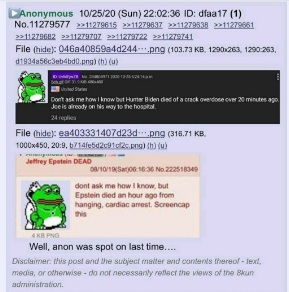 The viral images with videos showed Hunter using drugs and engaging in sexual acts with multiple women. The anonymous user posted it online with a message that read: “Don’t ask me how I know but Hunter Biden died on a crack overdose over 20 minutes ago. Joe Biden is already on his way to the hospital.”

The wild claim on the microblogging site, with several users sharing the screenshot claiming that Hunter committed suicide by drug overdose. The reactions are lukewarm as seen here and here.

Hunter Biden died about twenty minutes ago from a crack over dose, he just got Epsteined 🔥 pic.twitter.com/N0Y4srYk3D

Don’t ask me how I know but Hunter Biden died of a crack overdose over 20 minutes ago. Joe is already on his way to the hospital.

It may be noted that Joe Biden’s first son Beau Biden died of brain cancer in 2015. Hunter Biden is his second son, who is in the news over the leaks from his laptop given for repair in a local store. Many claims about his tapes and encounters have been debunked online and removed by Twitter and Facebook.

Secondly, Hunter Biden is very much alive and the claim is totally false as common sense dictates that such news would make headlines and not appear in Chinese social media first. No such news has appeared nor did Hunter Biden ‘died’ as claimed. The common reaction is that it was a “wild” claim.

Conclusion: The claim is