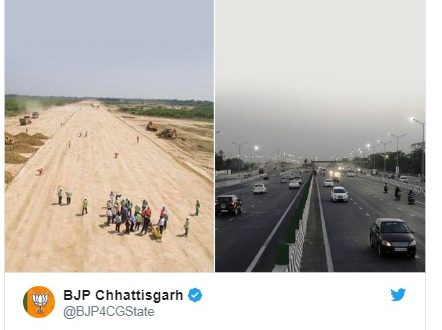 Recently, BJP’s regional heads and state wings have been posting a spree of image-based messages on Twitter and Facebook  showcasing their achievements in the last five years under the series “5 Year Challenge”.

But unknowingly BJP Chhattisgarh and BJP’s Karnataka Twitter images are misleading or wrong and used to show the positive side of the development.

Here is our #5YearChallenge.

In this Twitter message, BJP Chhattisgarh unit has shown a barren land on one side and another picture claiming its completion and stating that it was the Western Peripheral Expressway built under the Modi government. But actually, both pictures are not true as claimed.

The above picture was taken by Shutterstock photographer on March 17. (Screengrab of Google search result)

The second picture was actually that of Delhi-Meerut Expressway, part of which has been opened up after inauguration by Prime Minister Narendra Modi in May 2018. It was then tweeted by Union Minister Vijay Goel as shown below:

Faster than faster, in the path of #NewIndia under the dynamic leadership of PM Sh. @narendramodi the nation prospers! Glimpses from the Delhi-Meerut Expressway that will be dedicated to the public tomorrow by Hon’ble PM. #SaafNiyatSahiVikas #4YearsOfModiGovt #TransformingIndia pic.twitter.com/qOecJw49OW

The 5-year Challenge campaign of BJP has used wrong pictures claiming that it was the Lucknow-Agra Expressway. Our rating of the news is ?? (Misinterpretation).