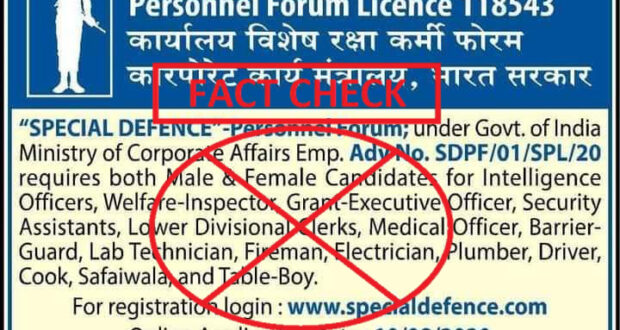 In its 15th– 21st August edition, Employment news- a flagship job journal from the Ministry of Information and Broadcasting which provides latest government job vacancies- posted a job vacancy by the “Office of the Special Defence”.

The said vacancy had job opportunities for both male and female candidates pertaining to jobs such as “Intelligence Officers, Welfare- Inspector, Grant- Executive Officer, Security Assistants, Lower Divisional Clerks, Medical Officer, Barrier- Guard, Lab Technician, Fireman, Electrician, Plumber, Driver, Cook, Safaiwala, and Table- Boy”. It had more than 500 vacancies open. The starting date for the applications was August 10, 2020, while the closing was September 25, 2020. The notice also stated the website of the Office (www.specialdefence.com). 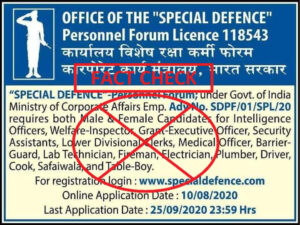 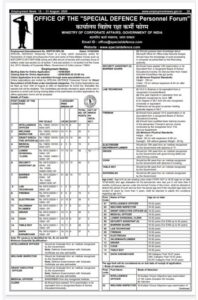 The fake ad in older editions

Suspicions arose when the vacancy stated that they were hiring Intelligence Officers. The Research & Analysis Wing is a secret agency in India. One cannot directly apply to it. The notice stated how the Office of the Special Defence Personnel Forum was under the Ministry of Corporate Affairs. On checking the list of offices under the Ministry of Corporate Affairs, this organization falls neither under the Attached & Subordinate Offices nor under its Apex/ Autonomous Bodies. There isn’t any such ministry or organization under the Union Government.

Offices under the Ministry of Corporate Affairs

Similarly, all government websites have a domain name suffix of gov.in and never a .com suffix.

When we checked the site mentioned in the vacancy, the site was no longer available but their email address was still mentioned online. 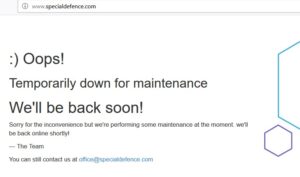 PIB Fact Check called the advertisement “fake” and said, “no such organisation exists under the Ministry”.

Employment News has removed the ad from its current online copies of the edition as the “veracity is not established”. It regretted the publishing of the ad and said that “strict checking mechanisms for approving ads for Employment News are being put in place immediately”. 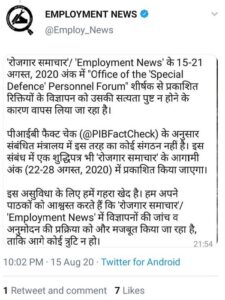