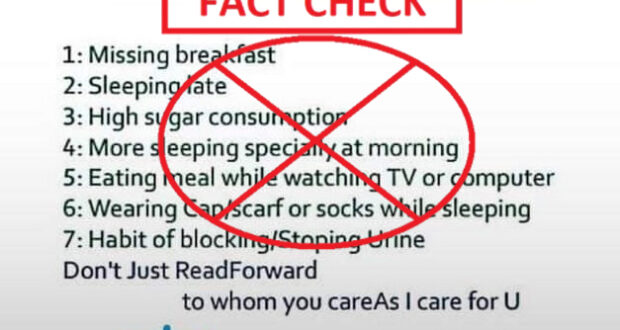 No, WHO did not list out these ‘brain damaging’ habits; Fact Check

A post is doing rounds on social media with a claim that the World Health Organization (WHO) has laid down seven habits as the biggest brain damaging habits. The alleged list includes:

The same list urges people: “Don’t Just Read Forward to whom you careAs I care for U.” The post, using the WHO logo, is shared widely on social media and Digiteye India received one such post on its WhatsApp fact-checking number. 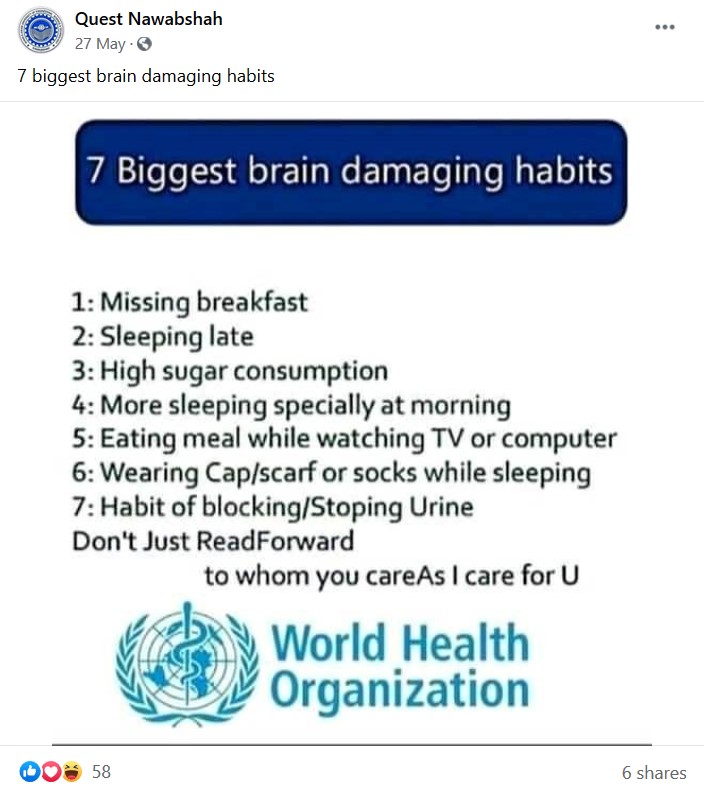 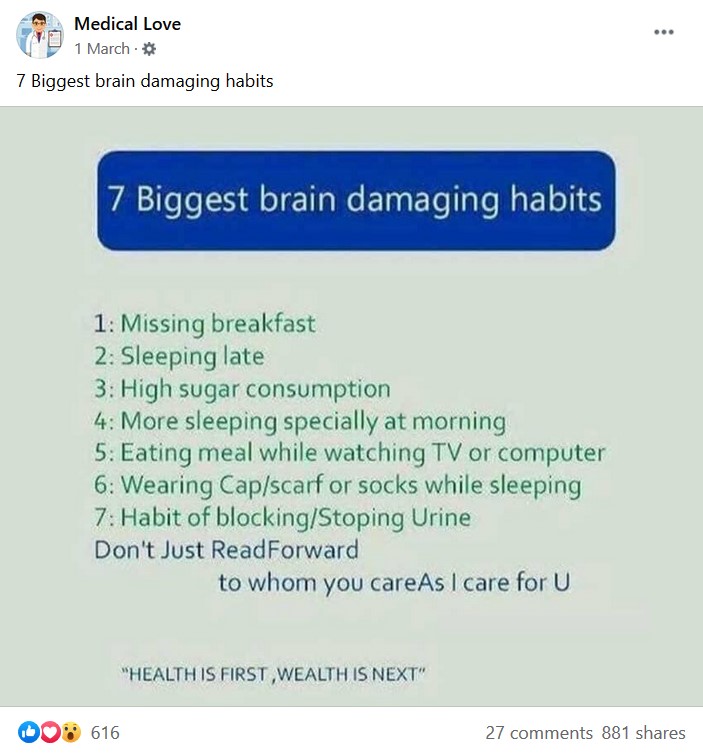 The number of grammatical and syntax errors in the post makes it highly unlikely that it was shared by WHO. These points, in the same order along with the same image, were also found on a Bangladesh-based news website’s report dated May 27, 2020. We checked the WHO database and reports for any information on brain damage and found none. To verify these claims, we will break them down and fact checked.

The first point says that missing breakfast leads to brain damage. A Reader’s Digest report states that skipping breakfast leads to a drop in the blood sugar because of the time gap between dinner and breakfast. It does affect cognitive function. The report says how “dietary carbohydrate breaks down into glucose and it is important to get the right amount of carbohydrates for breakfast to optimize cognitive focus and memory.” It does not lead directly to brain damage.

Additionally, it also leads to obesity. A study by Tang et al. which was conducted on Chinese white-collar workers show how skipping breakfast does impact short term cognitive function. Another study by Giovannini et al. shows how regular breakfast consumption “may reduce the risk of chronic diseases due to the potential impact on the composition of the overall diet, and is also associated with improved learning abilities and better school performance in children.”

The second point claims how sleeping late leads to brain damage. Adults need 7-9 hours of sleep per night to function at their best. Dr Itzhak Fried, a professor of neurosurgery at the University of California, Los Angeles (UCLA), in a report published in Live Science said that robbing the body of sleep robs the neurons from their ability to function properly which “paves the way for cognitive lapses in how we perceive and react to the world around us.”

Sleep deprivation dampens brain cell activity. A study by the Harvard Medical School shows how individuals who sleep too much and those who sleep too little are on the receiving end for issues such as blood pressure problems, diabetes, etc. Excessive sleep deprivation increases the chances of early onset of Alzheimer’s disease.

Common sense tells how high sugar consumption leads to weight gain and obesity, dental decay and diabetes among others. Sugar releases dopamine and in the long run, can be addictive to the brain like any other narcotic. As per WHO recommendation, we require 25 grams of sugar per day in our diet. Studies have listed how too much sugar leads to decreased cognitive function, anxiety and even resistance to insulin.

Daytime sleeping eventually leads to lack of proper sleep in the night. When individuals do not sleep at night, they deprive the body and the brain of its natural healing and recovery processes. This will further lead to irregular sleeping patterns which mess up the body’s sleep cycle. Afternoon siestas of 1.5 hours and power naps of 10-15 minutes have proven to boost an individual’s productivity and mood.

Distracted eating, or multitasking while eating, refers to doing other work such as watching TV or working in front of a computer while eating. Harvard Medical School stated how distracted eating can lead you to eat more than required and the food is not savoured while eating. Mindful eating can reduce calorie intake because it usually takes 20 minutes for the brain to process whether the body requires more food or not.

Sleeping with socks on

A significant population sleeps with socks on in cooler temperatures. Sleeping with socks on or keeping the feet warm while sleeping increases blood flow in the feet which reduces the time required to drift into deep sleep. Sleeping with socks regulates body temperature and decreases chances of Raynaud’s (a condition when affected areas of the skin, usually the toes and fingers, lose circulation and start to throb or swell).

A study by Ko and Lee “found that feet warming using bed socks during the whole 7-h sleep period improved sleep quality by accelerating sleep initiation and maintaining the relaxation of the body while sleeping, without disturbing the operations in the homeothermic core”. This has proved beneficial in cooler countries. However, in a tropical country like India sleeping with socks on will lead to an increase in body temperature and thereby increased sweating.

Occasionally holding in urine will not cause problems. It is problematic only when it becomes a habit. Possible side effects include urinary tract infection, damage to pelvic floor muscles, and even kidney stones. In extreme cases, it can pave the way to urinary incontinence.

Excessive of anything is bad. While the above seven “habits” do not directly lead to brain damage, they can lead to negative and life-threatening effects only when done in excess. Our rating