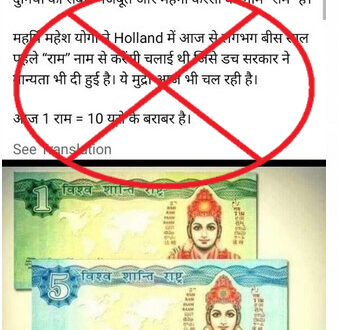 Raam is NOT the most expensive currency in the world; it’s a bearer bond

Various posts on social media are claiming that there exists a legal tender called “Raam” which is the most stable and the most expensive currency in the world. The posts claim that the alleged exchange rate of Raam equals ten euros. Some users also claim that it is the currency of the Netherlands. It is also claimed that these notes were issued Maharishi Mahesh Yogi in Holland in 2001. 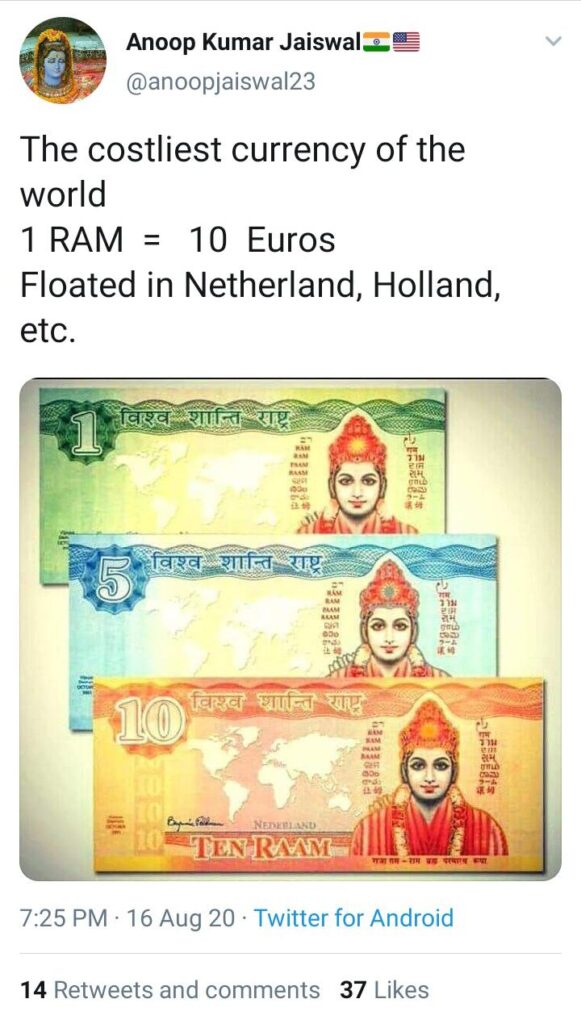 The image going viral along with the posts shows the alleged legal tender in denominations of 1 Raam, 5 Raam and 10 Raam. They have ‘Vishwa Shanti Rashtra’ printed on their header. The Global Country of World Peace (GCWP) had issued Raam as a local currency and a bearer bond in 2001.

A bearer bond is not a legal tender which can be used to buy or sell services or commodities. A bearer bond is a liquid bond which is not registered to any users, unlike registered bonds. Anyone who “bears” the bond becomes its de facto owner. In very simple terms, it is like a currency which cannot be exchanged for goods or services. It is like a physical certificate with its maturity date and interest value. Raam Bonds earn a total of 3% interest after five years. As bearer bonds provide complete anonymity of the holder, it has been discontinued in major countries because it paves the way for tax evasion, money laundering, theft, and forgery.

According to a 2003 BBC article, more than 100 Dutch shops have accepted the notes. Benjamin Feldman, ‘Minister of Finance’ of the Maharishi movement, told BBC that the main idea behind Raam bonds was “to promote a balanced world economy, reduce poverty and create world peace”. It was in 2003 that shops in the Netherlands accepted the notes at a fixed rate of 10 Euros.

Raam Mudra, as it is called, is locally accepted at the Maharishi Vedic City in Iowa, USA. A Dainik Jagran article, from 2017, states that these bonds are used in 30 villages and various shops in the Netherlands. The bearer of these bonds can encash them at the banks.

In the BBC article, the Dutch Central Bank said that a close eye was kept on Raam Mudra and “can be used as long as the notes are not used as legal tender and it stays within a closed-off circuit of users.”

Also, the currency of the Netherlands is Euro and not Raam as some users claimed. As it is circulated in a closed circuit of users, till date they remained merely as bearer bonds.