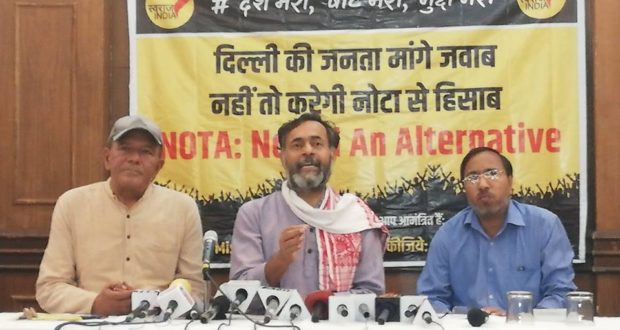 Here’s the video shared by Malaviya in which Yadav was seen speaking to a crowd in Muslim dominated Mewat:

I usually don’t carry TV debates to social media but making an exception to expose @_YogendraYadav’s janus face. Here is a video where he can be seen bragging his Muslim identity to a largely Muslim audience in Muslim dominated Mewat. If this isn’t cynical politics, then what is? pic.twitter.com/sPeHqaILpB

The video was in response to a TV debate on India Today over BJP’s Bhopal candidate Pragya Singh’s recent remarks. Yogendra Yadav challenged Malviya to produce any proof that shows him playing caste politics. In his reply, Amit Malviya shared the above video clip and asked Yadav, “When are you withdrawing from public life?”

Translation: “If he (my father) wanted, he could have hated Muslims throughout his life. If he wanted he could have become an RSS member. It would have been the usual course. But he decided that neither Hindu nor Muslim, they should become human. Hence, he decided that he will give Muslim names to his children. That is how I was named Salim.”

The video depicts Yadav saying that his grandfather was murdered in the presence of his father, then seven years old, by a Muslim mob but instead of nurturing grudge, he chose to follow Mahatma Gandhi’s path and gave Muslim names to his children. Hence, his original name was Salim but owing to bullying in school, it was changed to Yogendra when he was five years old. But his oponents claimed that he was using his name to get Muslim votes but what follows in his speech was different.

Some key wordings such as “Na Hindu banega na Musalman banega, insaan ki aulaad hai insaan banega” was deleted from Malviya’s video, claiming that the speaker was appealing to Muslims for a vote.

Conclusion: Yogendra Yadav has explained why he was named Salim by his father but it was misrepresented and used in a different context by Amit Malviya. Our rating of this claim is ??? Misrepresentation.