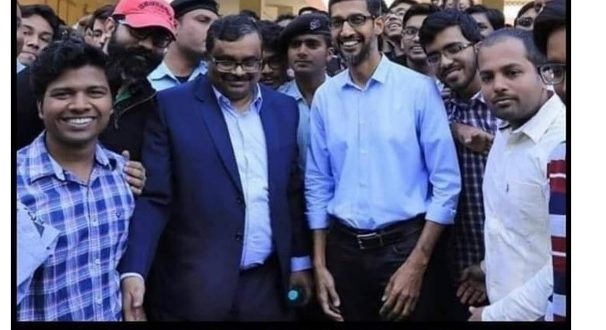 Sundar Pichai at IIT Karagpur when he visited his alma mater on Jan 7, 2017 was photoshopped. (Twitter)

With Indian elections entering the second phase of voting on Thursday, April 18, 2019, a tweet was going viral coinciding with the voting taking place in Tamil Nadu, which is home to Google CEO Sundar Pichai.

It was tweeted by one Sarkar Ashok under the Twitter handle @ashok_nanban claiming the Google CEO flew down from the US to vote in Indian elections. It was also rooted to a movie by name Sarkar which had the lead actor playing Sundar Ramasamy (for Sundar Pichai) returning to Tamil Nadu just to cast his vote. (However, it was later replaced with a picture without the claim.)

In Mumbai today and happy to celebrate #IWD2019 with the India chapter of Women@Google at their “I Am Remarkable” event. Thank you for inspiring me with your stories about the experiences, challenges and triumphs of being women in tech. pic.twitter.com/0W8eXVFk3c

Ironic but Sundar Pichai is a known American citizen though he frequently visits India and his visit to Mumbai was just a month ago to kickstart ‘Bolo’ app for kids in Hindi. Since his voting is ruled out, the typo in the message 9caste instead of cast) has attracted our attention. When Digiteye India checked the image’s authenticity with Google Reverse Image search that threw up a 2017 photo shared by Pichai himself when he visited his alma mater IIT Karagpur.

Here’s the image and the tweet by Sundar Pichai:

Also got to visit my alma mater (and old dorm room!) for the first time in 23 years. Thanks to everyone @IITKgp for the warm welcome! pic.twitter.com/OUn7mlKGI7

Conclusion: Though the image has a positive meaning, it was intentionally photoshopped with two years old image of Sundar Pichai. Our rating of this claim is ??? Misrepresentation.