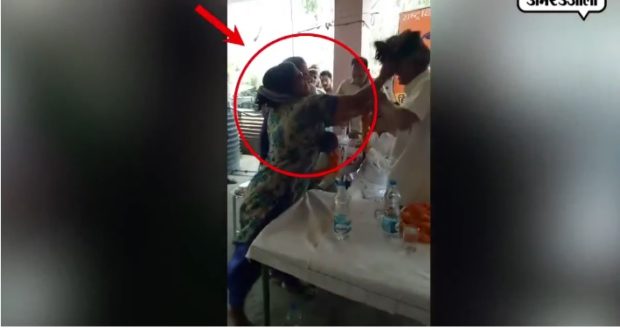 Screengrab of Amar Ujala report with the original news video

A viral video posted on a Facebook page is going viral this month coinciding with the Lok Sabha elections. It shows a woman thrashing a leader with her slipper in Himachal Pradesh.

The 32-second long video shows two women walking to the leader at a Himachal Parivahan Mazdoor Sangh meeting with flowers. One of them suddenly takes out her slipper and hits at the leader and soon restrained by some people.

See the video below:

The video claims that in Hamirpur, the BJP MLA was hit with a shoe by a woman. The video was shared nearly 700 times on Facebook this month.

When Digiteye India examined the video and searched its origin, the original video surfaced to have been an old one taken in June 2018. Posted by one Rajendra Shukla on Facebook, the video was seen by 117,388 persons in the last seven months.

When searched for the news on Google, it showed that the person in the video was not Himachal Pradesh BJP MLA of Hamirpur, Narinder Thakur as claimed in the video.

The reality is that the incident took place in on June 22, 2018, when the Himachal Pradesh RTC Union Leader was thrashed with a slipper by a woman trainee conductor while the other tried to garland the union leader. It was widely reported in local media.

Conclusion: Our rating of this claim is Mostly False with ???? rating. The video was true but the claim that the person who was beaten at the meeting was not Hamirpur BJP MLA as claimed.