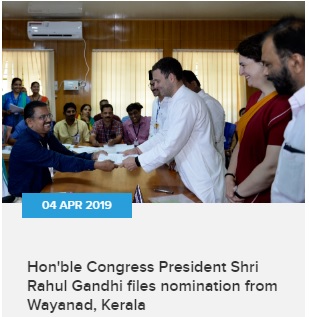 Rahul Gandhi was not standing while filing nomination papers at Amethi? Fact Check

Some social media messages and photos have shown Rahul Gandhi as seated while filing the nomination papers before the officers, whereas PM Narendra Modi was visibly standing while filing his papers at Varanasi recently. The claim was that Rahul ignored the norm to stand while handing over the nomination papers to the officers but PM Modi respected it.

It waas widely shared among the BJP groups, including BJP national secretary Sunil Deodhar, whose post single-handedly got more than 12,000 shares. Since it was never pointed out when Rahul Gandhi filed his papers from Wayanad earlier, Digiteye India fact-checked the claim and found it totally false. 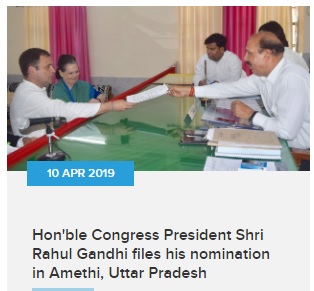 Due to the height of podium of the Returning officer at Amethi, Rahul Gandhi, though standing is misinterpreted as sitting, which is not true. (INC)

If seen from the front, because of the height of the podium where the officer was sitting, it looks as if Rahul Gandhi was not standing. But here is another picture taken from the floor that shows that Rahul Gandhi, his mother Sonia Gandhi and sister Priyanka Gandhi were in fact standing clearly while presenting the papers to the officer. The INC video below shows the fact clearly:

Even in Wayanad, where he filed nominations prior to Amethi, same was true and clearly visible in the INC video as shown below:

Conclusion: The claim is totally false ?????. Rahul Gandhi was clearly seen standing at the time of handing over his nomination papers in both Wayanad and Amethi as seen in videos.