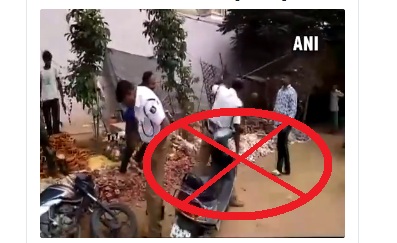 The Motor Vehicles (Amendment) Act 2019 has imposed steep penalties for traffic violations and turned controversial ever since it came into effect from September 1, 2019. Social media is abuzz with many videos circulating as people’s reaction to traffic policemen who are on a spree of imposing huge penalty for any violation of traffic rules.

One such video is here:

The caption in Hindi translated into English as: “More fine and one person broke a policeman’s skull.” The above message was posted on Twitter along with a video which showed a man assaulting a policeman. The message claimed that due to steep penalties imposed by the traffic cops, people are turning violent.

When Digiteye India searched for videos on Youtube and Twitter, an old video belonging to Karnataka traffic police came up. Here’s the original video taken in 2018 and it was related to an incident when a man in a drunken state assaulted traffic policemen who had stopped him because he was not wearing a helmet. It was covered by ANI as below:

#WATCH: A man who was allegedly drunk assaulted two traffic policemen in Karnataka’s Davangere earlier today. Police arrested the man and a case has been registered against him. pic.twitter.com/kahGksU0A7

Conclusion: In the wake of new regulations which came into effect on Sept. 1, 2019, this video was re-used with a misleading message. Our rating of the claim is ??? Misrepresentation.