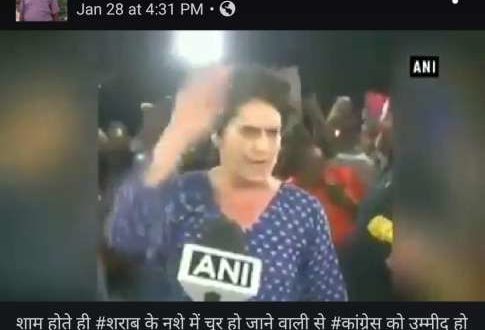 This blurred image from an old video of a candlelight rally was used to shw her as drunk. (Screengrab)

After her appointment last week as Congress Party general secretary, Priyanka Gandhi has come under the scanner of many people. One screengrab taken from a video of ANI soon hit the social media showing her her hand angrily. The caption below stated that “she was always drunk by evening and how Congress can fulfill its expectations under her leadership.”

See the image below shows that it was posted on January 28 at 4:31 PM, with the caption in Hindi. It was widely shared by some right-wing Facebook users such as @Rajputsena, @IamwithAdityanath, (now removed), Humlog and @modimission19.  The image was blurred to show that it was an intoxicated Priyanka Gandhi. 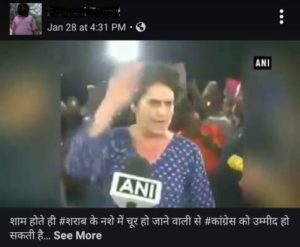 This blurred image from an old video of a candlelight rally was used to show her as drunk. (Screengrab)

When Digiteye India suspected the caption filled with allegations, it has decided to check the source of the image. Since ANI microphone is visible in the picture, it was decided to explore the news agency ANI videos. A thorough search revealed that the video was taken by ANI way back in April 2018. The context was equally different.

The context was a candle light march organised by the Congress at India Gate in New Delhi as a protest against the government’s policies. Her brother Congress President Rahul Gandhi and her husband Robert Vadra were also present at this event, according to the news agency.

As clearly seen in the video, Priyanka Gandhi was visibly agitated over pushing by the crowd, and she was speaking to ANI, asking those who want to push, to go back home. See the original video below:

The video shows that Priyanka Gandhi lost her cool at the pushing of women participants in the candle light march and was making a complaint in an angry tone. She was not drunk as made out. But her angry expression was photo-shopped  using a screen grab from the video and made out to be that of a drunken Congress leader. Here, not only misrepresentation but also false allegations have been made by the miscreants. Our rating of this story stands at ?? (Misinterpretation).