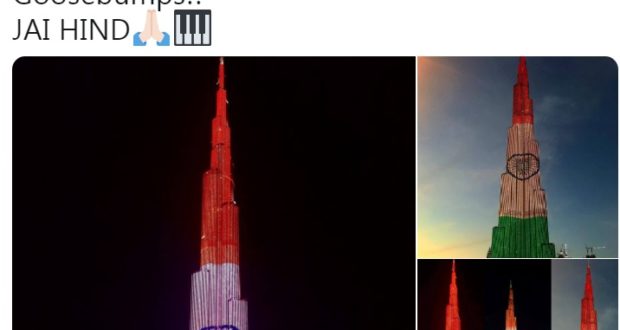 On Jan 26, 2017, officially the Burj Khalifa was lit in Indian tricolour (Twitter)

Tricolour on iconic monuments worldwide on R-Day? What’s the fact?

Come Republic Day, images showing the Indian tricolour illuminated on world-famous iconic buildings go viral. These fake images do the rounds every Republic Day since 2015. This year too similar images have gone viral on social media.

Actually, in 2017, UAE’s iconic building Burj Khalifa donned the Indian tricolour — saffron, white and green, with the song Jai Ho from the Oscar-award-winning movie, ‘Slumdog Millionaire’, as part of the Republic Day celebrations on January 26. It also coincided with the visit of  Crown Prince of Abu Dhabi and Deputy Supreme Commander of the UAE’s Armed Forces, as the chief guest of the Republic-Day parade that year in New Delhi.

The event was widely shared on twitter as shown below. It was shared on January 25, 2017, a day before the Republic Day parade:

However, a blog by name FilterCopy went a bit further and made all the iconic buildings in the world don the lighted Indian tri-colour and tweeted it the next day, which was shared by many. It has been doing this annually. This year too, some Facebook accounts have started sharing these pictures, claiming that the iconic buildings in the world have donned the tricolour lighting to celebrate our Republic Day. The interpretation given was that it showcases India’s standing abroad. See it below:

These photos keep surfacing on Twitter and Facebook, and are usually taken from the FilterCopy account on Facebook. The iconic buildings include London’s commercial skyscraper 30 St Mary Axe, Big Ben Clock, Colosseum in Rome, Eiffel Tower in Paris, Leaning Tower of Pisa, Petronas Twin Towers, statue of Christ the Redeemer in Brazil, Statue of Liberty in New York and Burj Al Arab in the UAE, as seen below: 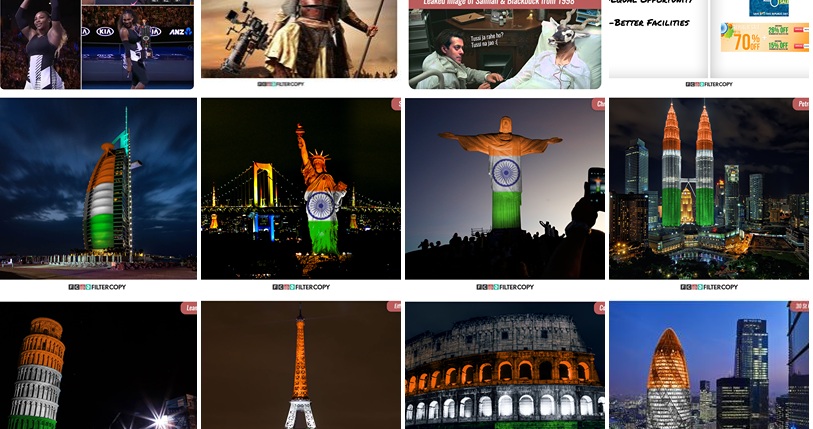 Netizens often mistake these to have actually happened all over the world as part of the Indian Republic Day celebrations, while some of them attribute them as an achievement of Narendra Modi’s government in making India respectful in the eyes of the world. However, the truth is that they are fake images going viral every year on the Republic Day.

Digiteye India team has digged into the past references to these pictures and realised that it was actually shared on Facebook by FilterCopy for the first time in August 2015 when Narendra Modi visited the UAE. It was shared online claiming that Burj Khalifa was lit up with tricolour as a show of celebration of Modi’s visit. The truth is no such lighting took place in the year 2015 as claimed. A senior reporter at Khaleej Times confirmed it via his Twitter handle as seen below:

To be clear: TV reports in #India saying the #BurjKhalifa will light up in Indian colours for Modi’s visit are absolutely FALSE.

But the annual fake news never stopped and re-surfaced on the occasion of Republic Day. Since, the event in 2017 was correct, it gained more legibility as a world-wide event. FilterCopy has been tweeting these pictures on every Republic Day and this year too they appeared on Facebook and widely circulated.

The images are false except that of Burj Khalifa, that too in 2017. All other iconic buildings donning the tricolour on the occasion of Indian Republic Day was not true as shown above. These are “fake” images being circulated annually. Our rating of this news is ?? (Misinterpretation).