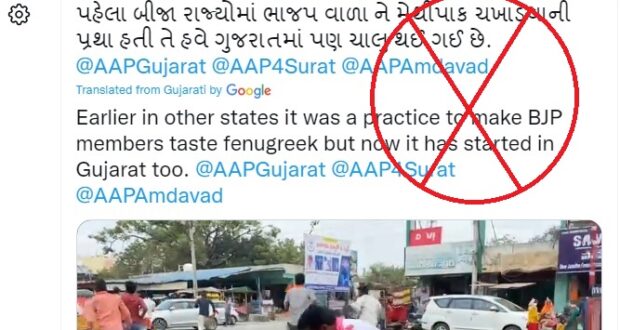 A video is being shared widely in Gujarat as the rift between the ruling Bharatiya Janata Party and the aspiring Aam Aadmi Party are at logger heads on social media forums with several claims and counter-claims.

Since the content and images are familiar with a similar video circulated in Telangana during a fight between the Telangana Rajya Samithi (TRS) workers and the BJP, our team took it up for fact check and found that it was the same old video being recycled in the context of Gujarat, just as the Assembly elections are scheduled ahead.

The shop with signboards in Telugu clearly state in Telugu and not in Gujarati. The protesters are seen speaking in Telugu “mellaga, mellaga”, which means slowly, slowly in Telugu. Several signposts indicate that it was Jangaon, including the “Jangaon Traffic Police” signboard. And the flags are of TRS party in pik colour.

When checked for the original video, we found a YouTube video uploaded on February 10, 2022 by several news outlets reporting that clashes broke out between the TRS and BJP in the state of Telangana after there was a call for an Anti-Modi protest against the Prime Minister.

Hence, a false video has been shared in Gujarati by Dharmendra Vavliya, a local ward representative from Surat, Gujarat.

Claim Review: Earlier in other states it was a practice to make BJP members taste fenugreek, now it continues in Gujarat as well, tweeted AAP local leader in Surat Dharmendra Vavliya.

Conclusion: False, an old from Telangana depicting a fight between TRS and BJP workers has been used with a flase claim as that of Gujarat.