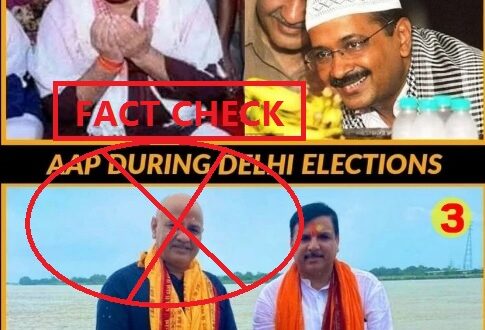 The state assembly elections in Uttar Pradesh, Punjab and Goa, among others have seen Aam Aadmi Party (AAP) being the target of sarcasm on many occasions. One such collage of images showed that AAP leaders Arvind Kejriwal, Manish Sisodia and Sanjay Singh in different attires in different states. 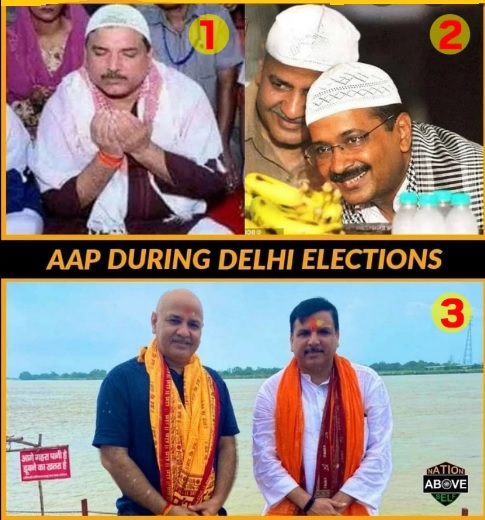 The remark says while AAP leaders don skull caps in Delhi elections, they wear saffron scarves in UP during the ongoing elections. The image has gone viral on social media.

When we checked the original pictures, it was found that the images were true but taken out of context in the collage.

A Google Reverse Image search shows that the first one of Sanjay Singh and the second image of Kejriwal and Sisodia wearing skull caps belonged to an “Eid Milan Samaroh” in Delhi when they attended Iftaar party in Delhi and the images were published widely in news outlets between July 7 and July 10, 2016. But then Delhi Assembly elections were held a year ago and the claim was wrong.

The third image of Sisodia and Sanjay Singh in saffron scarves was from the banks of Sarayu river during their visit to Ayodhya in September 2021. It was taken around mid-September 2021, when the UP elections were almost six months away.

Hence, the claim in the collage is misleading as the pictures of the AAP leaders were taken either well ahead of the elections or much before the elections.

Claim: AAP leaders observe Muslim rituals during elections in Delhi and wear saffron scarves during polls in UP.

Conclusion: None of these images were taken during the elections.