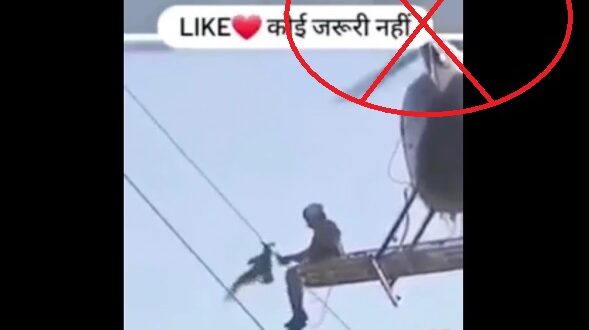 Here is a video going viral claiming that a man on a helicopter is rescuing a bird tangled in a power line and it was shared with a claim that this unusual daring act was performed by a soldier of the Indian Army. 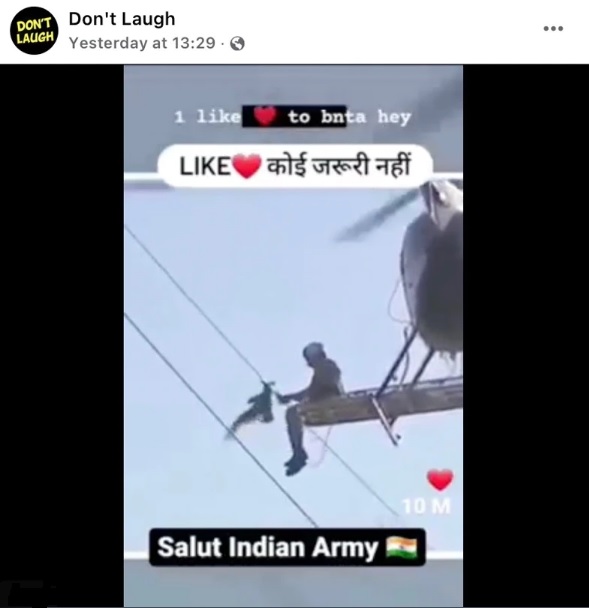 When we received the request for fact checking it, we first searched with a frame cut on Google Reverse Image search and then on Youtube only to find that it was an old video uploaded in 2013 from Virginia, United States. Moreover, the wording on video clip shows dubious typos reflecting that it was not original such as “Salute” instead of salute.

In fact, the original longer version of the video shows the entire rescue process and it was uploaded on the YouTube channel of “WAVY TV 10” on September 19, 2013.

The incident took place in September 2013 when a seagull that was stuck in power lines for 24 hours near Lesner Bridge in Virginia Beach was rescued by Virginia Dominion Power, an American power and energy company.

As per the report by “WAVY TV 10”, Dominion Power spokesperson Bonita Harris said: “What we have to do is send a helicopter with special equipment. It actually has a platform attached to its side and one of our linemen will have to get on the platform and physically reach over to remove the bird from the line,” Bonita says in the video. After the rescue, the bird was taken to the Virginia Beach Society for the Prevention of Cruelty to Animals for treatment.

Hence, it is clear that the viral video is an old one not related to the Indian Army.

Claim:
Video shows an Indian soldier in a helicopter rescuing a bird tangled in power lines.

Conclusion:
This is a 2013 video from Virginia Beach, United States showing an employee of a power line company rescuing a seagull that was trapped for hours.