When BJP took up prefixing “Chowkidar” to all its members on Twitter, Fatima Nafis, mother of the mysteriously disappeared JNU student Najeeb, has asked them where her son is? Here’s the tweet by her:

If you are a chowkidar then tell me
where is my son Najeeb ?

Why Abvp goons not arrested ?
Why three toped agencies failed to find my son ? #WhereIsNajeeb https://t.co/5GjtKSTIDh

In reply to it, one Twitter hanlder has claimed that Najeeb has joined ISIS, the Islamic militant organisation in Syria and is fighting. The picture was shared widely on social media. In WhatsApp, it was shared by many right wing groups alleging that “Our Najeeb, Najeeb of JNU, Najeeb of Azadi gang… has been placed in ISIS directly from JNU. He has sent his wishes to Rahul ji and Kejri sir ji from Syria,” says another message that was widely shared.

REMEMBER NAJEEB
THIS IS GUY WHO WENT MISSING IN 15/10/2016 ENTIRE JNU AND ITS ANTINATIONAL FORCES LIKE @ArvindKejriwal & @RahulGandhi @kunalkamra88@ReallySwara@UmarKhalidJNU
ACCUSED ABVP AND EVEN PM MODIJI
THIS SAME GUY BROTHER OF @Shehla_Rashid HAS JOINED ISIS
SPIT ON U JNU pic.twitter.com/aEIflV7CRG

The photograph claims that Najeeb was in the centre of the photo. Since resemblance to the person in image is different, Digiteye India took it for Google Reverse Image check and found that it was an old picture of Reuters on Syrian rebels and the person referred in it was not Najeeb.

The image was taken by Reuters photographer on March 5, 2015 when IS militants posed with their flag in the background in a town near al-Alum. The date when JNU scholar Najeeb disappeared was in March 2017. So, the image was a fake one that keeps surfacing on social media. 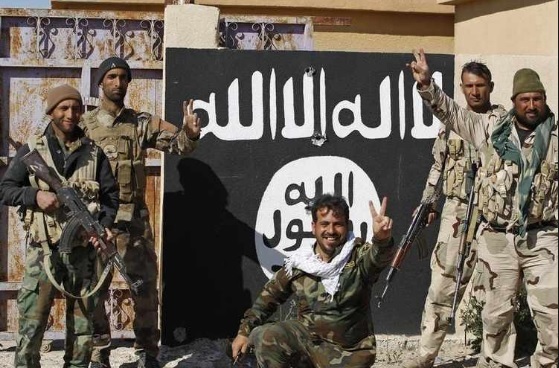 Shiite fighters stand near a wall depicting the Islamic State (IS) black flag in the town of Tal Ksaiba near al-Alum on March, 5, 2015 (Reuters photo by Thaier Al-Sudani )

It may be recalled that in media reports linking Najeeb’s association with the ISIS surfaced but denied by the family. Najeeb, 27, a first year M.Sc. student, went missing from his JNU hostel, after a fight with members of Akhil Bharatiya Vidyarthi Parishad (ABVP) students on one night. He was not traced since then.

Conclusion: The claim has been proved false by mere date it was taken. Our rating is ????? Totally False.