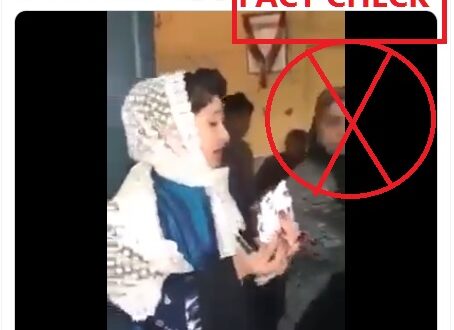 As the state assembly elections in Uttar Pradesh are going on in phases, the Samajwadi Party has been facing false allegations and several videos have been released on social media with false claims. In this context, a video of a woman holding several Voting Identity cards has been going viral with a claim that the burqa-clad women are caught red-handed voting for Samajwadi Party using fake voting identity cards. This video below got more than 1,560 retweets and 1,679 likes on Twitter.

When the Digiteye India team searched in Google and Youtube, several videos surfaced. The original video was actually uploaded on November 27, 2017 and again shared in April 24, 2019 when the general elections were held in India.

The original video was from Rampur when a woman named Sheila Khan was contesting for the post of Rampur Nagar Palika Chairperson, from the Bahujan Samaj Party (BSP) and she had filed her nomination on November 26, 2017. She was seen in this video during her campaign:

In the video being circulated now, she was seen with seized fake identity cards which she claimed led to her defeat. She told media as per the video:”I was the only one who caught onto the fake voter IDs, and my supporters shot that video where I confronted those women, which later became viral.” Hence, the video was falsely used in the UP assembly elections now in 2022.

Claim: Burqa-clad women with fake Voting identity cards are voting for SP in UP elections.

Conclusion: The video and the claim are totally unrelated. The video is an old one from 2017 when civic poll was held and the woman was showing some seized fake voting identity cards to talk about fraud in voting.