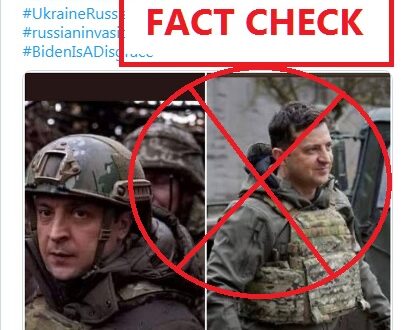 As Ukrainian war unfolded, several images with claims have been making rounds and the latest was its President Volodymyr Zelenskyy donning military uniform and the caption claims that he was wearing the uniform and would take up arms to personally fight the war against Russia.

Ukrainian President #Zelensky took off his clothes and put on a military uniform to fight with the army to protect his country. Hat’s off to him!!!💯🥇🪖🎖️#UkraineRussia #worldwar3#UkraineRussiaConflict#russianinvasion #BidenIsADisgrace pic.twitter.com/OtiGXt5dyO

The caption reads:“Ukrainian President #Zelensky took off his clothes and put on a military uniform to fight with the army to protect his country. Hat’s off to him!!!.”

The image is being shown on several TV channels and the claim is widely shared on social media, especially Twitter here and here.

When Digiteye India found the image rather unusual as the President of any country need not wear the army uniform to join the war, the Digiteye India team decided to cross check the claim. When we searched in Google Reverse Image Search, some old photos emerged but not related to the ongoing war now with Russia.

The original image was uploaded by new agency Reuters on April 21, 2021 during his visit to Donbass region on April 9, 2021. The description reads: “Ukraine’s President Volodymyr Zelenskiy meets with the country’s service members at the combat positions near the line of separation from Russian-backed rebels on the Day of the Armed Forces in the Donetsk region, Ukraine December 6, 2021. Ukrainian Presidential Press Service/Handout via REUTERS/File Photo”. See the image of Reuters here:

Now that the war is going on, these images are being misrepresented with the claim that the Ukrainian President is in the forefront of the armed resistance wearing the uniform. Hence, the claim is not true.