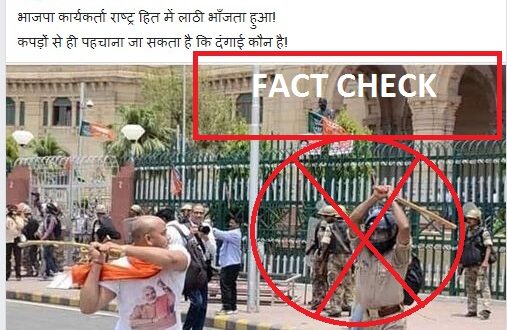 Fact Check: Old image of man clashing with police in UP claimed as farmers’ agitation

As news media is abuzz with the farmers rally of tractors in New Delhi on the Republic Day and reaching the Red Fort to hoist different flags of their own, an image depicting a man wearing a white Modi t-shirt and attacking a policeman with a lathi has surfaced. 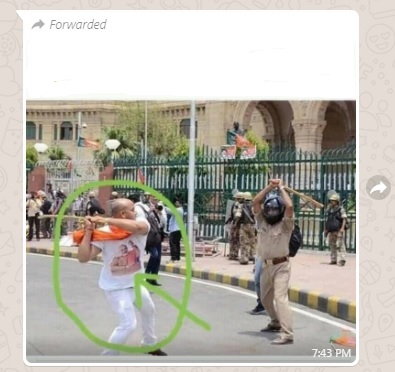 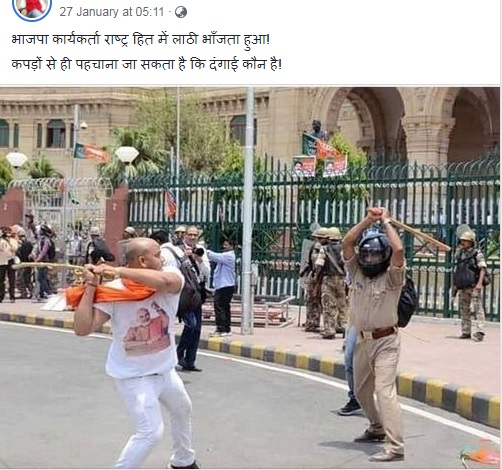 Digiteye India received the image on its WhatsApp handle for fact check. When searched on social media, the image is being widely shared with the caption in Hindi that read “‘भाजपा कार्यकर्ता राष्ट्र हित में लाठी भाँजता हुआ! कपड़ों से ही पहचाना जा सकता है कि दंगाई कौन है!‘.” [Translation: The person disguised himself as a farmer and attacked the police. From his clothes, you can make out who he is.” It was shared on Facebook here and here, just a day after the Republic Day.

When Digiteye India received the image with a request for fact check, the team went for Google Reverse Image search and found out that the image was as old as 2014. It was pertaining to a news item related to BJP workers’ clash with the police on June 30, 2014. Bharatiya Janata Party (BJP) workers clashed with police in UP during protests against the Akhilesh Yadav government over rising crime rates in the state of Uttar Pradesh, when he was the chief minister.

The caption for the photo reads, “A BJP activist fights with a policeman during the protest outside the Assembly in Lucknow on Monday (PTI)” and it was widely used by many news outlets here and here.

According to these news reports, on June 30, 2014, BJP, then as an opposition party protested against the ruling Samajwadi Party government over increasing cases of crime in Uttar Pradesh. During this protest, BJP workers fought police batons and water cannons outside the state Assembly in Lucknow.

Claim
The person in the photo disguised himself as a farmer and attacked police to defame the protest against farm laws. His identity lies in the Modi t-shirt he’s wearing.

This is six-and-half-year-old photo from Uttar Pradesh. On June 30, 2014, BJP workers clashed with the police during protests against the Akhilesh Yadav government over rising crime rates in the state.