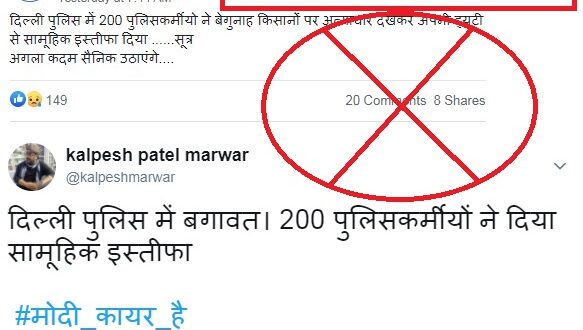 Fact Check: No, 200 Delhi policemen did not resign as claimed

A message on Twitter and Facebook started claiming on Saturday, Jan 30, 2021 that 200 policemen in Delhi have tendered mass resignation in support of protesting farmers, soon after the reported clashes between farmers and police on Republic Day.

Farmers’ agitation has been going on along Delhi’s borders for over two months demanding repeal of three contentious farm laws. The message in Hindi read:” । “अभी तो पार्टी शुरू हुई है”।।” [Translation: 200 policemen in Delhi have given collective resignation in support of farmers. The party has just begun]. It was shared on Facebook and Twitter as shown below: 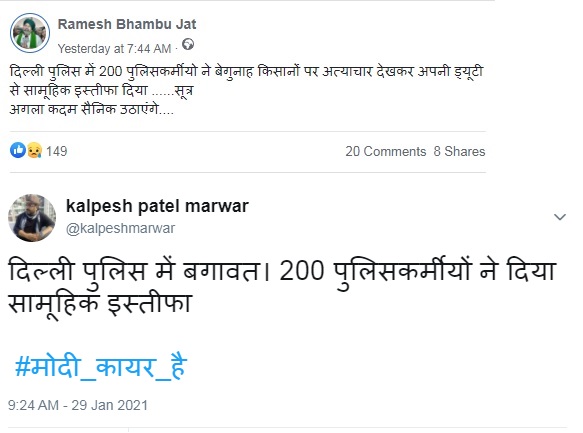 However, there was no such news item in any news media and Google search did not provide any such development. Anil Mittal, a Delhi Police public relations officer, later told India Today that there has been no such collective step by Delhi Police personnel. “The social media claim is false. There has been no mass resignation in Delhi Police in support of farmers. Our personnel who were injured during the Republic Day violence are still recuperating in different hospitals,” Mittal told India Today.

Later, PIB has put out a clarification that there was no such mass resignations by Delhi Police.

Claim: 200 policemen in Delhi have given collective resignation in support of farmers.

Conclusion: No such mass resignations tendered by the personnel of Delhi Police. The PIB has also termed it as FAKE claim.

Our rating is Totally False —