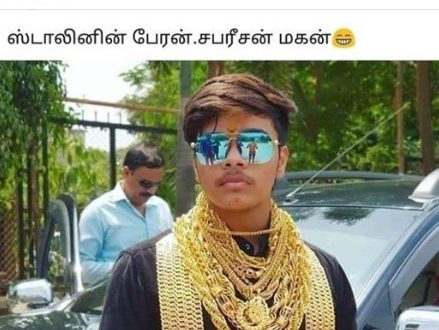 Is this ‘golden boy’ grandson of MK Stalin? Fact check

Recently, an image of a boy wearing golden jewellery around his neck and hands, is being shared on Facebook. The caption claimed that he was Tamil politician AIADMK chief MK Stalin’s grandson.

Posted by Facebook user Tushar Natrajan, the image of the young man showing off flashy gold chains and other ornaments on Facebook page called ‘New India’. It has been shared already 400 times. The caption proudly declares that it was Dravidian pride.

When Digiteye India searched in Google Reverse Image search, the results show that the boy was not MK Stalin’s grandson as claimed but Harshvardhan Pandharkar, a golden boy from Pune in Maharashtra. His Instagram account shows that he has more than 52,000 followers and many of his pictures have been flashed on his page.

Conclusion: The boy is not the grandson of Stalin as claimed. Inbanithi, the son of actor turned politician Udhayanidhi Stalin and grand son of DMK leader, M. K. Stalin is different as shown in this family picture. Udayanidhi with his son Inbanithi.