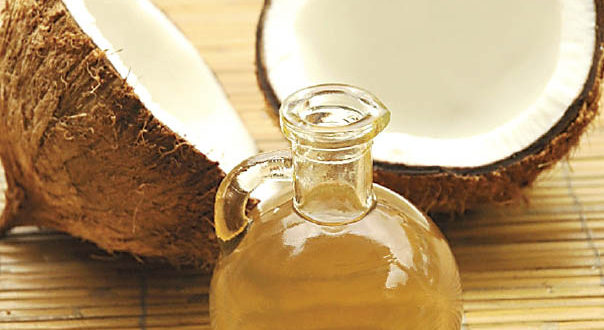 Dengue has been a regular occurrence in many parts of the country in July, including the capital Delhi which has reported many cases. As dengue cases hit headlines daily, so are the claimed remedies at home in India and among them one has come up with a suggestion that coconut oil is the solution. Such claims regularly appear during this season of the year when dengue cases are reported. See some messages on social media appearing way back in 2016.

Dengue is a disease caused by a virus spread primarily by female mosquitoes of the species Aedes aegypti, according to the World Health Organization.  But another claim stated that coconut oil application below knee level till the feet is a way to keep off mosquitoes, which cannot fly higher than knees. 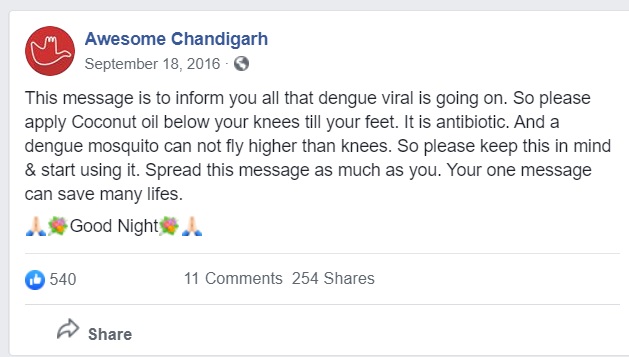 Why can’t a #Dengue mosquito fly higher than the knees? Looks like the coconut oil mafia is trying to get in on some action. pic.twitter.com/DU59i8Uckd

Coconut oil is widely in Kerala as an edible oil and studies have proved that it has 92% saturated acids, with lauric acid being the main constituent, which is seen in high concentration in human breast milk and it has anti-inflammatory and antimicrobial properties. [See Dayrit FM. The Properties of Lauric Acid and Their Significance in Coconut Oil. J Am Oil Chemists’oc. 2015;92:1–15. [Google Scholar]

According to experts from World Health Organization, it is not true that mosquitoes which spread dengue cannot fly higher than the knees. Hence, the remedy suggested that applying coconut oil as antibiotic is also disproved. Medical experts have pointed out that coconut oil is not a mosquito repellant and its effect in keeping off mosquitoes is just for a few minutes. Instead they suggest wearing full pants to keep mosquitoes away. See this video from 11:25 minutes onwards:

“Coconut oil is not an antibiotic. There is no evidence to show that it can prevent or cure dengue,” said WHO Philippines’ Dr Gawrie Loku Galappaththy. See the report of AFP HERE.

Moreover, the dengue pathogen is a virus transmitted through Aedes mosquito bites, which cannot be treated with anti-bacterial drugs.

Conclusion: Our rating of the claim is Totally false ?????.

[CORRECTION: The conclusion has been revised as the question of antibacterial elements in coconut are redundant since the claim is cure to Dengue, which is caused by virus. We have removed redundancy and made it clear that anti-bacterial treatment is not a cure to virus.]