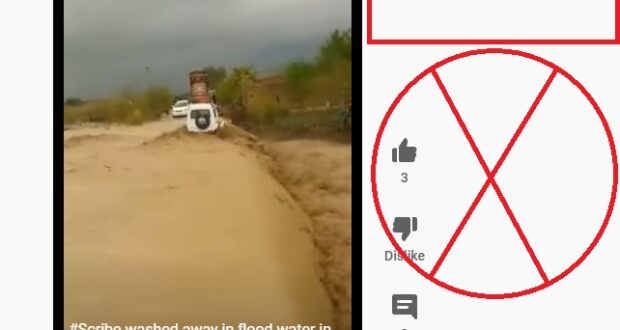 Amid recent news where a Telugu news channel NTV reporter died after his car was washed away during floods in Jagtial district, Telangana, a video is being circulated claiming it was the reporter’s.

Zameer, an NTV reporter and another person named Syed Riyaz Ali were returning to Jagtial from Bornapalli village when their Swift Dzire was washed away by the floodwaters near Ramojipet village.

Local residents had managed to pull out Syed but Zameer could not be saved and his body was recovered three days later on July 15, 2022.

After the incident, a video has gone viral on WhatsApp and Twitter, showing a jeep being swept away by flood waters when crossing a flooded road. The caption read:

“#Scribe washed away in flood water in #Jagtial #Telangana. He was on his way to over rescue operation of 9 laborers stranded in an island middle of #godavari river in Raikal Mandal.”

It was also shared on Youtube channel YoYo as seen below in Telugu:

The Digiteye India team fact checked the video as it was Dzire car and not a jeep as claimed. On checking Youtube, we found that the video was old and from an incident in Pakistan when a Suzuki Potohar jeep being washed away in March 2020.

The video is from Harani district in Balochistan, Pakistan and it was uploaded on March 23, 2020 that a flooded river near Harnai (Pakistan) swept away the Suzuki jeep. Again, the same video was seen being shared a year ago here and here.

Otherwise, the red car of Zameeruddin was retrieved as shown in this video:

The car in which NTV reporter #Zameer was travelling, washed away in #floods between Ramojipet and Bhoopathipur in #Jagtial dist of #Telangana on Tuesday, after cover the rescue operation of 9 labourers of #Bornapalli, was found on Thursday.#TelanganaFloods #godavarifloods pic.twitter.com/8dl5ug1Kh8

Conclusion: An old video of Pakistan from March 23, 2020 is being wrongly shared showing a jeep as that of Zamaruddin’s Suzuki Swift car.