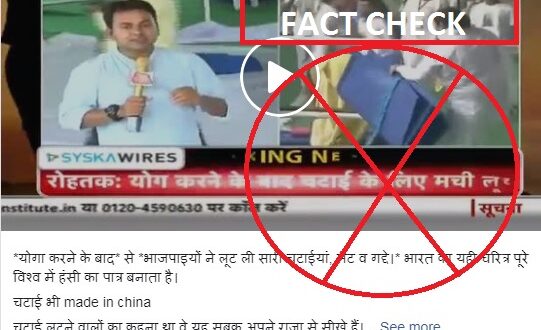 A video clip of the Hindi news channel Aaj Tak is being shared on social media showing people running away with yoga mats soon after the International Yoga Day celebrations, usually done on June 21 each year.

The post said the incident took place on Yoga Day on June 21, 2021 in Rohtak, Haryan as below:

Digiteye India took it up for fact checking and a search on Youtube showed that the video was old one dated 2019 as participants are clearly seen without wearing any mask as was done this year due to the Covid pandemic.

A Reverse Image Search based on a clip showed that the original ‘Aaj Tak’ clip that was aired on its YouTube channel on June 21, 2019. When played that clip, the clip begins at 4:20 min after starting it. Here is the original video.

The news report stated that people took away the yoga mats from the venue where Union Home Minister Amit Shah and Haryana Chief Minister ML Khattar had participated in the programme for International Day of Yoga in 2019. It was reported by news agency ANI with the clip here in 2019:

#WATCH Haryana: A pandemonium broke out in Rohtak after people looted yoga mats from the venue where Union Home Minister Amit Shah & CM ML Khattar had participated in the programme for #InternationalDayofYoga earlier today. pic.twitter.com/8ZVjJZOh74

As seen this year, many yoga session on this day were held with people wearing masks.

Claim: After doing Yoga, BJP people looted all the mats

Conclusion: The video was old and re-used to discredit the Yoga Day on June 21, 2021.