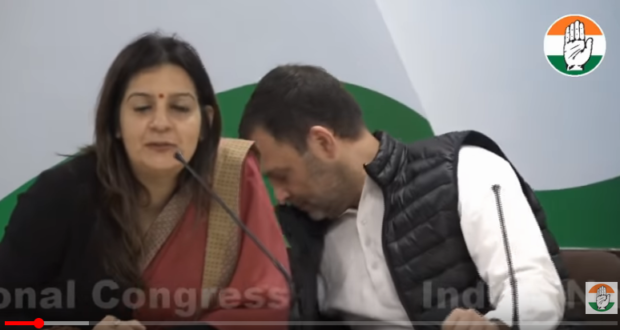 The above video showing Rahul Gandhi taking some papers behind the chair of Priyanka Chaturvedi, while she was speaking out something. She was shown in the background voice saying that she cannot live without him.

“If you haven’t seen this, then you have seen nothing today,” says the caption in Hindi. The video has been shared at a time when elections notice is due any time now. It was uploaded by Politics Solitics on Facebook and was seen by more than 52,220 people.

Since the video shows too many anomalies and also the Indian National Congress waterline, Digiteye India took up the claim for a fact check. Upon searching recent videos of Indian National Congress on their Youtube channel, the team could match the movement at 0:57 minute to 1:05 minute in the following video where Priyanka Chaturvedi’s clothing too matched the first video. Upon further watching, the footage of Rahul Gandhi taking out papers from behind her perfectly matched. Changing the sound track, the video was clearly used to mislead and misrepresent facts intentionally.

Conclusion: The video was clearly clipped and different voice was inserted in sound track to convey a different meaning, raising apprehension among people about Rahul Gandhi and Priyanka Chaturvedi. Our rating of this claim is ??? Misrepresentation.