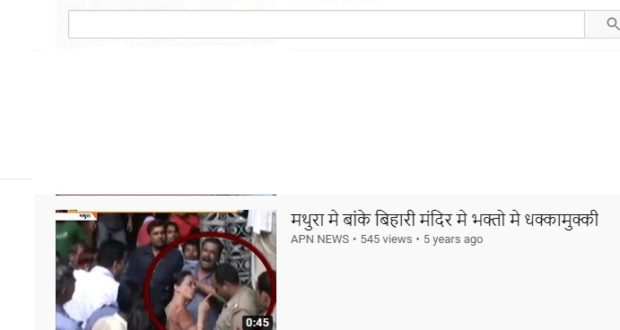 A video showing Andhra Pradesh police beating devotees at the famous Tirumala temple in Tirupati has gone viral on Twitter and Facebook.

The video, shared on Facebook, reached more than 10,000 and it was put out by a Facebook page of ‘Resurging Dharma’ with the claim that “Non #Hindu security personal manhandling Hindu devotees at #Tirumala, Save Tirumala. remove all non-#Hindus working inside Hindu Temples!”

When Digiteye India searched for using Google Reverse Image, similar video appeared in 2017 came up and it was shared from a Facebook page Amaravati, which also stands for the capital of AP. It received 5.3 million views and more than 1.2 lakh shares.

When Digiteye further searched Tirumala-related videos in Telugu on Youtube, APN News channel carried this video in 2014 when the scuffle between devotees and the police took place in Banke Bihari Temple in Uttar Pradesh. Here’s the original news about it on TV:

Conclusion: This video is not from Tirumala but from UP that too taken five years ago but manipulated to show as if it was recent and to show Jagan in bad light as anti-Hindu. Our rating is totally false ?????