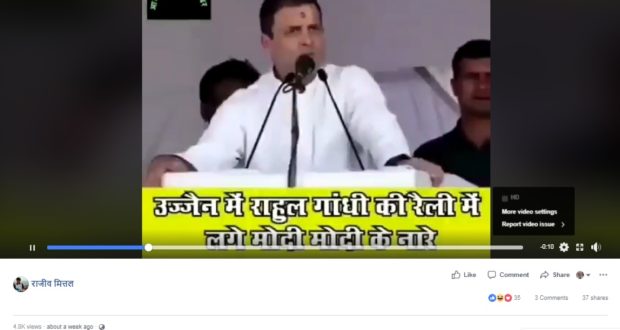 The above video on Facebook has gone viral depicting that a rally by Rahul Gandhi in Ujjain last week has been interrupted by slogan-shouting mob who repeatedly said, “Modi”,”Modi”.

It was uploaded by one Rajiv Mittal and the 12-second video ends abruptly after Rahul Gandhi says that they should be allowed to raise slogans. The comment says that Rahul Gandhi’s speech was disrupted by pro-Modi slogans.

While pro-Modi slogans have been greeting Rahul Gandhi in Bangalore and other places recently, this particular video looked not original and not even recent going by Rahul Gandhi’s attire in current videos. When Digiteye Team searched further for the original video, it threw up results on Google search that the Ujjain rally was very old and to be precise, it was held on October 29, 2018 during the state assembly elections in Madhya Pradesh, where Ujjain is located.

The video link takes us to the original one uploaded by the Congress Party on its official Congress Youtube channel and here it is:

There was no sloganeering heard in the sound track of this video whereas a clip from this video was taken and shown with the addition of sloganeering from other videos chanting Modi and Modi by people.

Conclusion: The video was fabricated and a fake one with sound track changed to mislead people ahead of the elections to Lok Sabha. Our rating is ??? Misrepresentation.