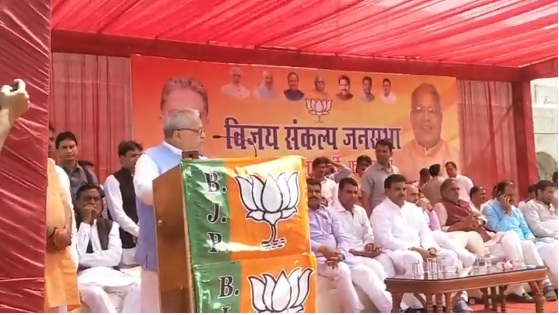 Did Kalraj Mishra say on stage, ‘If I come down, I’ll shoot you’? Fact check

Congress spokesperson has made a remark on Twitter that BJP MP Kalraj Mishra was threatening to shoot protestors while speaking at an event and circulated the following link to a video. The 22-second video shows former union minister and BJP MP from Deoriya threatening to shoot those who were protesting while he was speaking. while he was speaking at an event in Faridabad.

The caption in Hindi reads: “He had apparently said: Had it happened in his home state Madhya Pradesh, he would have stepped down from the stage and shot those responsible for opposing him. Is this the message from BJP? Get shot if you ask questions?” — is what Surjewala wrote in his twitter message.

BJP MP Kalraj Mishra did not make a statement about getting down from the dias and shooting people.
What he said was:”Today, entire India is behind Modi and here you are trying to ruin this speech. Aren’t you ashamed of yourselves? You are nationalists, think about the country. Look at the candidate. I was a sitting MP from Deoria, still I said I wouldn’t fight elections. We were told that people above the age of 75 must introspect about their future and I am already 80 plus,” he said.

“I said I won’t fight elections, you must have seen on TV. Fighting elections is not a criteria. Friends, I felt very bad today. If it is my state, “I’d have come down (from the stage) and said the same words,” Mishra said. His entire speech is available on his Facebook page. The particular reference starts at 1:00 to 1:12 minutes. He did not say,”If I come down, I’d shoot at them,” as claimed by Surjewala.

Conclusion: Since no such words were used in the original video, the claim made by Congress spokesperson Randeep Surjewala was false. Our rating is ??? Misrepresentation.