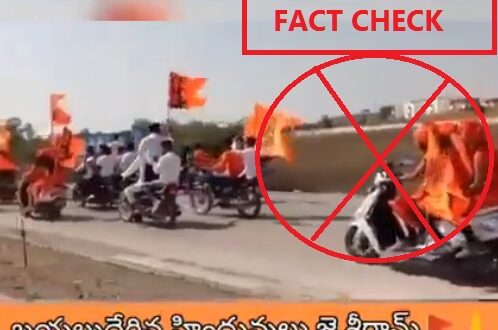 Nizamabad in Telangana has made headlines over the installation of a Shivaji statue last week coinciding with the birth anniversary of Mahratta ruler. When two groups clashed over the issue, police made arrests and imposed section 144 to.

On the sidelines, however, social media is abuzz with several claims of Hindutva groups from nearby Maharashtra state reaching Telangana on motorcycles. Here are some claims made on Twitter. The accompanying video shows several people in their saffron attire on motorcycles.

The video has gone viral on Twitter and the Telugu version said, “Thousands of Hindu brothers are arriving in Bodhan from Maharashtra.”

When a frame of the video was checked on Google Reverse Image Search, the results showed old links to a video that was uploaded in 2020. It was originally shot on February 27, 2020 in Nandgaon, Maharashtra during the Shivaji Jayanti celebrations and uploaded on Youtube with the title “SHIV JAYANTHI UTSAW (NANDGAON)”.

It was described as “Nandgaon bike rally for Shiv Jayanti” in another video uploaded on March 14, 2020. Shivaji Jayanti falls on February 19. In fact, all these videos were uploaded soon after February 19, 2020 and they were from the same bike rally organised in Nandgaon.

Hence, the recent video of saffron-clad bikers is not associated with the current row over Shivaji’s statue installation in Telangana’s Bodhan and the claim that they were headed to Bodhan is also not true as no news coverage of the same was seen in local newspapers either.

Conclusion: Old 2020 video of Nandgaon, Maharashtra was uploaded with the claim and not true. 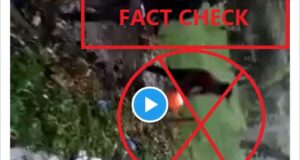 This video showing Muslim women being harassed is not from India; Fact Check