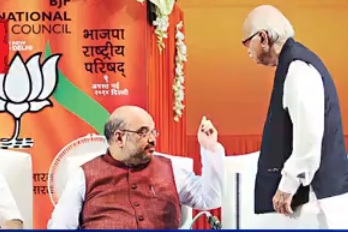 The caption said, “Open insult to Advaniji”. It further read:”Height of arrogance as Amit Shah directs party veteran leader Advaniji to go off the stage, thus insulting the person who made the party stand on its own.”

The video posted by Charcha Chopal was viewed by more than 20,683 person on Facebook.

It may be noted that LK Advani was the co-founder of BJP along with the late former Prime Minister AB Vajpayee. He represented Gandhinagar Lok Sabha constituency for almost three decades since 1991 with a break of just two years in between.

Now that BJP President Amit Shah is contesting the Lok Sabha constituency from Gandhinagar, the video gained currency and was shared by many people. When Digiteye India team checked the video with its origin, and found out that the original video was entirely different and that too five years old.

Watch the video from 21:30minutes to 21:40 minutes to catch the reality. The actual video belongs to BJP national convention held in Delhi on August 9, 2014 and the speaker’s podium was set up behind the row where the leaders were seated. Further, the video shows that Amit Shah was gesturing to Advani where he should go and speak. It has no relevance to the claim that Amit Shah was disrespecting BJP leader Advani.

Conclusion: The caption was tweaked to show that Amit Shah was arrogant and was directing the veteran BJP leader to go off the stage. Our rating of the claim is ??? Misrepresentation.