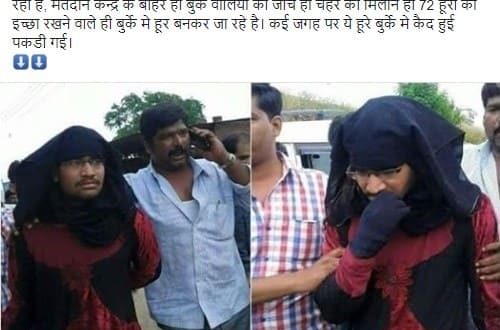 As Indian elections are in full swing, several misleading images have been doing rounds. The Facebook handle “Narendra Modi for 2019 PM” has shared the above image recently claiming that a burqa-clad Congress worker (man) was held while trying to vote in the name of one Shameena (woman voter). It was shared by more than 11,000 users.

Digiteye India tried to take it up for fact-checking. A Google reverse image search showed immediately that it was actually a four-year-old image of an alleged RSS worker, who was captured in Azamgarh, Uttar Pradesh while throwing beef inside a temple that could have potentially triggered communal riots.

The news was widely reported by the media and here is one such link:

The news report published on Sept. 30, 2018, flashed pictures of a burqa-clad alleged member of Rashtriya Swayamsevak Sangh (RSS) caught by residents of the small town Azamgarh in Uttar Pradesh. Several Twitter and Facebook accounts have shared the image of the man in a burqa.

Conclusion: Using the same old image, the claim that it belongs to a Congress worker caught redhanded while voting as a woman was not true. Our rating for the claim is ???? Mostly False.