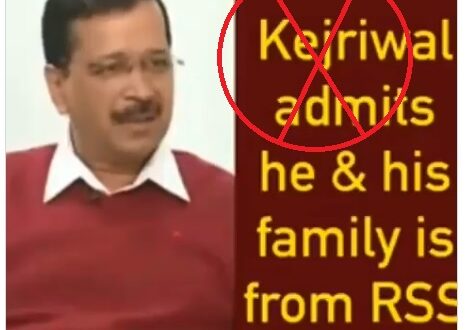 A short video clip is going viral on social media in which AAP chief and Delhi Chief Minister Arvind Kejriwal says:“Our family was of the Jan Sangh Parivar. We are born ‘BJPwallah’. My father was in Jan Sangh. He went to jail during the emergency.”

It has found significance since Arvind Kejriwal is from Aaam Aadmi Party that fought BJP or Jan Sangh parivar vehemently on ideological issues. Soon, many social media users are sharing it with claims that Arvind Kejriwal’s family history has BJP links.

Owing to its inherent limitations, Digiteye India took it up for fact checking the video. With the help of some selctive keyframes, we cross checked for the original video in Google Reverse Image Search and found that it was an old video that was uploaded last year.

Further specific search on Youtube landed us in a video by NDTV news channel that was uploaded on February 4, 2020, in which Arvind Kejriwal can be seen saying these things but quoting someone else and in a different context altogether. Watch the full video here (The video has been disabled for sharing by other platforms). At 7:15 duration into the video, Kejriwal starts recollecting how a BJP worker told him.

Here, Kejriwal was talking about an incident in which a Bharatiya Janata Party worker told him about his family roots in BJP and the Sangh parivar. Essentially, he was recalling the incident verbatim and was quoting what the erstwhile BJP worker told him.

“I saw a BJP man saying on a channel that we are a Jan Sangh family, we are born BJP, my father was in Jan Sangh, (during) Emergency I went to jail, but this time I will vote for Kejriwal because my child studies in a government school and earlier government schools were in such a bad condition. He made my child’s future.” Kejriwal had just repeated the words the BJP worker said in his interview verbatim but never said it himself or referring to his own family’s roots.

The interview pertains to the pre-election time in February 2020 when Kejriwal was speaking to the media about his government’s accomplishments.  The video was clipped and only the part about his recollection was shown to state that Kejriwal himself was claiming this. Hence, it’s a false video clip used out of context with wrong claims.

Claim: AAP chief and Delhi CM Arvind Kejriwal said, “Our family was of the Jan Sangh Parivar. We are born ‘BJPwallah’. My father was in Jan Sangh. He went to jail during the emergency.”

Conclusion: Arvind Kejriwal was talking about a BJP worker, who said these words and not about himself or his family roots.

"Our family was of the Jan Sangh Parivar. We are born ‘BJPwallah’. My father was in Jan Sangh. He went to jail during the emergency" arvind kejriwal bjp emergency period fact check Jan Sangh Jan Sangh Parivar rss RSS links 2021-11-21
Arun Nag
Previous: Did Japan ban microwave ovens due to harmful radio waves? Fact Check
Next: BJP leaders share poster with Srisailam dam in AP as UP dam; Fact Check