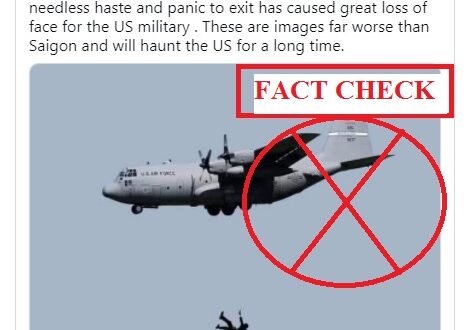 The visual photo of two men falling from a US aircraft that took off from Kabul Airport on August 16 has gone viral already. Another image showing one person falling off from a military aircraft with more clarity has been circulating on social media.

The caption reads: “The most evocative image to come out of Afghanista. Disaster for US image as a global super power. This needless haste and panic to exit has caused great loss of face for the US military. These are images far worse than Saigon and will haunt the US for a long time. (sic)”

The most evocative image to come out of Afghanistan. Disaster for US image as a global super power. This needless haste and panic to exit has caused great loss of face for the US military . These are images far worse than Saigon and will haunt the US for a long time. pic.twitter.com/vjAOG05GFD

This has been shared by Gen G.D. Bakshi @generalBakshi, a defence commentator on several TV news channels, on Twitter on August 23, 2021. The image was also shared on Youtube by a user with the caption “Pray for afghanistan” as shown here:

When the original video showing two men falling off was shown on many news channels, the clarity in this image has made it suspicious. Secondly, when we conducted a Google Reverse Image search for the second image of one person falling off a US aircraft, it showed the original picture.

The clear image belongs to an aviation website where the photo matches the aircraft, including the number but there was no man falling off the aircraft. The picture was old and taken in May 2017 at Prestwick Airport in Glasgow. The aircraft was C-130H Hercules while the one used in Kabul evacuation was C-17 Globemaster III aircraft.

Compared to the size of the aircraft, the falling man’s size should be much smaller than what was shown in the image in the Twitter message shared by Gen Bakshi. In fact, the video below shows how small it could be as no more than a dot on the screen.

Moreover, the captured video of Kabul showed two men falling off and lacks the clarity shown in this morphed picture. One of the two was identified as Afghan footballer Zaki Anwari and the news was confirmed by the Sports Directorate of Afghanistan.

As per details, Zaki Anwari, a young footballer, died on Monday after falling from a US military aircraft. The news was confirmed by the Sports Directorate the next day.#Afghanistan pic.twitter.com/UW8mmDTA5N

Claim: Image showing man falling from a US aircraft with more clarity.
Conclusion: The image was clearly morphed as the aircraft was different and also the size of the man in proportion the aircraft.