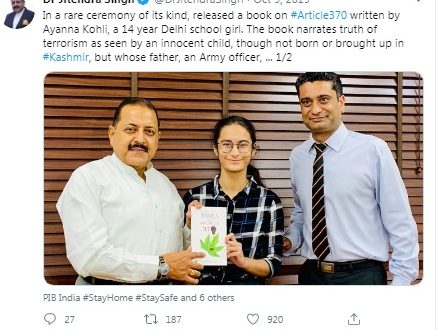 Did this girl write a book on Article 370? Fact Check

Union Minister Jitendra Singh launched a book titled ‘In the Times of Article 370’ written by a girl. Later, he tweeted about the event saying, “In a rare ceremony of its kind, released a book on #Article370 written by Ayanna Kohli, a 14 year Delhi school girl.” 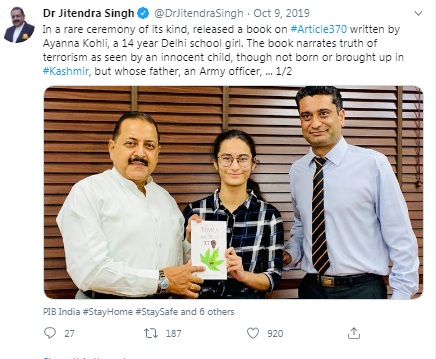 The news was covered by ANI and it wrote a synopsis of the book as one that “seeks to draw the inference that it was necessary to revoke Article 370 in order to bring lasting peace in Kashmir.” PTI also reported that 14-year-old Ayanna “wrote a book on Article 370.”

When suspicious about the content and context, Digiteye India team checked the book contents for more details and realized that the book is not about Article 370 of the Indian Constitution,which has become controversial ever since its abrogation in August making Jammu and Kashmir no longer an autonomous region in India. See the description on Amazon below:

Conclusion: Though the book is titled ‘In the Times of Article 370’, it is not about the removal of J&K’s statehood and special status but purely a work of fiction about protagonist Ram, who is an army man. Our rating of the claim is Exaggeration ?.