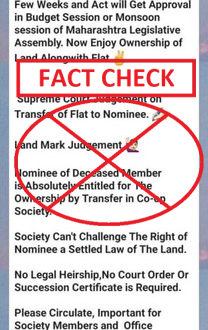 A message claiming that the Conveyance Deeds have been cancelled by the Maharashtra State Cabinet is going viral. The viral WhatsApp forward claims that a new law will be passed to surpass the conveyance deed and the flat owners will get a property card instead. The message was also received by Digiteye India on its WhatsApp fact-checking number.

The viral message claims that “flat Owners will get their name registered in Property Card of Revenue/Municipal Register” and this new amendment will “surprass the procedure of Conveyance Deed.” Further, the message makes more claims on the ownership of the property in a co-operative housing society (CHS) after the death of the primary owner.

A Conveyance Deed is a legal document which transfers the ownership right from the developer to the society. The deed is necessary to legally state the land and plot ownership of the society. A regular Conveyance Deed is made by the developer/builder/landowner within a stipulated time (four months from the formation of a CHS) by presenting all the legal documents to the Registrar which in turn hands them over to the society members without any inconvenience caused to either party.

A Deemed Conveyance, on the other hand, is when a builder refuses to cooperate (usually, to gain an increased Floor Space Index) and the society has to apply to the local authorities and to the Sub-Registrar who then issues a Deemed Conveyance under the Registration Act 1908.

The Maharashtra Ownership Flats (Regulation of the promotion of construction, sale, management and transfer) Act, 1963 (MOFA) talks about Conveyance in section 11.

Presently there has been no announcement to completely nullify the Conveyance Deed. The issue regarding Property Cards which the message talks about is from a Cabinet decision taken in August 2019. According to a DNA report, owners of flats and commercial units in Maharashtra will get Property Cards to firmly record their ownership of the property. The report quoted S. Chockalingam, Settlement Commissioner and Director of Land Records as below:

“No government department maintains ownership records of vertical properties. Municipal bodies have records for taxation purposes, and these are not ownership records…there is no such record for flats. The proof of ownership has to be proved through a chain of documents like the agreement with the builder or society records,” he said.

The Bombay Chartered Accountants’ Society clearly talks about the nomination of a flat in section 8. It states: “Membership in Co-operative Society or Company can be conveniently transferred if the original owner of shares makes a nomination in favour of somebody else. The new model bye-laws in bye-law 33 clarifies that person acquiring membership by nomination shall hold the flat in trust till the legal heirs are brought on record and shall not have the right to ownership and shall not create third party interest or alienation in any way whatsoever.”

– Misinterpretation. An amendment to an existing law has been misinterpreted as the cancellation of the old MOFA Conveyance laws.