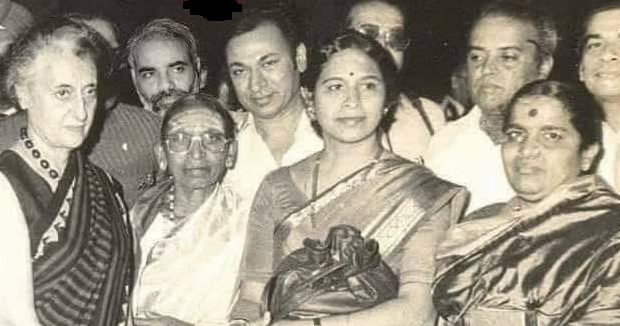 An old photo of Indira Gandhi with Kannada actor Raj Kumar in black and white is going viral on social media showing a young Narendra Modi as standing behind in the group photo.

The image shared by some Congress and other AIMIM supporters on Facebook said:”Prime Minister Modi had been a Congress supporter. What do you say now, Bhakts?

Here’s one posted by #Sameer_Ali_Farooqui:

It was shared by another Facebook page that supports Asaduddin Owaisi’s AIMIM party at the link given here:

At the look of it, the unbelievable photograph raised the eyebrows of our team and in a simple Google Reverse image search the true and original picture showed up. Here’s the original picture that soon hit the social media too: The photo was recently used by Quantum in a story on April 24, 2019 in a story headlined, “Karnataka’s Reluctant Politician: The Life and Times of ‘Annavaru’. In Karnataka, late actor Rajkumar is known as “Annavaru” and his following is immense even to this day.

The person who was morphed for Modi is apparently SM Krishna, erstwhile Congress leader and now a BJP member. However, Digiteye India could not verify the fact but compare the picture of Krishna taken from the same event.

The saree of Indira Gandhi remains the same and the second picture was, perhaps, taken at the same event as Rajkumar was also present with Krishna, who was a veteran Congress leader from the state of Karnataka those days.

Dr Rajkumar was seen in the photograph of former Prime Minister Indira Gandhi at a music event. Actually seen in the image were Dr Rajkumar’s family members and artists with whom then PM Indira Gandhi stood for the group photo. The person’s image behind them has been photoshopped to bring in Narendra Modi’s image.